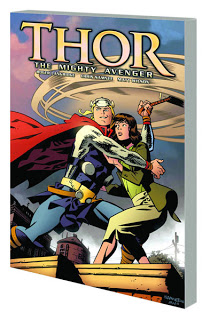 Somewhere around the middle of Thor: Mighty Avenger, plucky love interest Jane Foster offers Thor a chance to crash on her couch. It’s a cuddly moment with slight sexual undertones that goes right over Thor’s head. Already confused by the nature of Earthlings, the fallen Asgardian says with concern, “…Are you not worried about your virtue?” Foster smirks at the notion. It is quaint moments like the scene described above that sells Thor: The Mighty Avenger, an all ages pocket-sized trade from Marvel Comics that manages to rekindle the breezy early years of the Kirby/Lee era.

The first volume of what was supposed to be an ongoing series (more on that later) reintroduces the God of Thunder to a potential movie crossover audience by first introducing him to a small town in Oklahoma. Curiously, Thor has been jettisoned to Midgard (colloquially known as Earth) by his father Odin. Without any recollection of what caused such drastic abandon, Thor roams the town directionless, starting bar fights in the name of nobility and sleeping on the streets. A tussle with a local unsavory character brings him into contact with a museum worker named Jane Foster. In classic rom-com fashion, Jane is on the outs with her cowardly boo — naturally, the hammer-swinging, golden-haired Avenger will make a more than suitable rebound. 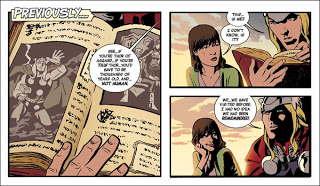 A few weeks ago, the Twitter-verse practically threw a tantrum when Marvel announced the cancellation of Thor: The Mighty Avenger. The level of support generated for the fallen series is what prompted me to grab the first collection and read it. Frankly, I’m somewhat disappointed.

While the creative combo of Roger Langridge and Chris Samnee instigate a playful series of catastrophes, the book lacks any real drawing power until the final chapter. There, Thor splits off from Foster and embarks on a revelatory “guy’s night out” that stretches from America to Great Britain. He’s joined by his Asgardian wingmen, “The Warriors Three.” Together, they invoke an adorable party spirit that leads to an entertaining guest appearance but arrives too late in the book (so late that it is immediately followed by Thor’s original 1962 appearance in Journey into Mystery as a reminiscent closer). 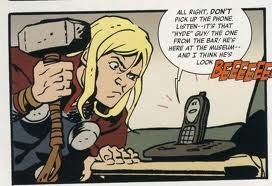 The writer and artist inject the book with plenty of charm. Chris Samnee draws the four collected issues like a bouncy Saturday morning cartoon, while Roger Langridge scripts the hero’s misadventures with a suitable airiness. For that reason, there is plenty to enjoy in Thor: Mighty Avenger, but the book’s sense of chance probably hurt its ability to be an ongoing.  Too often does Thor happen into a problem and too quickly does he wander to a conclusion. Amusingly, Langridge depicts him as a sort of misbehaved child, which makes for some humorous dialouge, but also makes the character inconsequential until the final story. The impact of such a writing method may not be felt in trade paperback, but probably tested the patience of its monthly audience. That’s too bad, because I’m sure I would have enjoyed seeing it continue further. 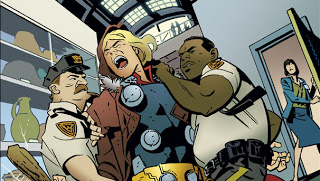