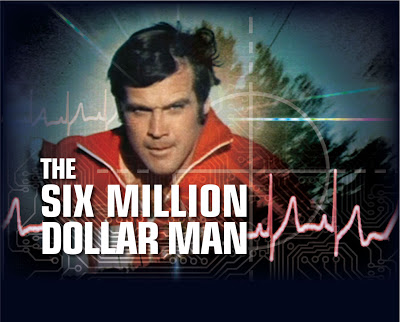 Not only did we name The Six Million Dollar Man our top Geek Gift, but the wonderful folks at Time-Life are providing us with three sets of The Complete First Season to give away!

One of the pop culture smashes of the ‘70s, THE SIX MILLION DOLLAR MAN starred Lee Majors as Colonel Steve Austin, a top NASA pilot critically injured when his experimental spaceplane crashed. Oscar Goldman (Richard Anderson), head of the OSI  used Austin as a test subject for an experimental procedure, rebuilding his body using cybernetic technology, making him the world’s first bionic man. Now, Austin works for Goldman and the OSI, protecting the nation from a myriad of threats.  Based on the novel “Cyborg” by Martin Caidin, THE SIX MILLION DOLLAR MAN launched with several made-for-TV movies in 1973, which then spun off into a hit for ABC, running from January 1974 to March 1978.  During its run, the program made Majors a pop culture icon, spawned three reunion shows, another series (The Bionic Woman, starring Lindsay Wagner) and thousands of licensed products, making THE SIX MILLION DOLLAR MAN one of the defining TV shows of the “Me” decade.

This set will not be available individually until October 2011, so this is a rare opportunity to check out the first season, which includes the original three pilot movies, and features such guest stars as John Saxon, Greg Morris, Gary Collins, Gary Lockwood, William Schallert, George Takei, Farrah Fawcett, and William Shatner. 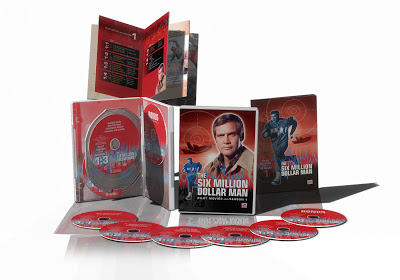 To enter, please send an email with your name and address and the subject header “6MDM” to geekcontest @ gmail dot com and answer the following question:

What body parts of Colonel Steve Austin were replaced with bionics?

U.S. residents only. You must be 18 years old. Only one entry per person per day and a winner will be chosen at random.

In this article:Contest/Giveaway, Nostalgia, Television