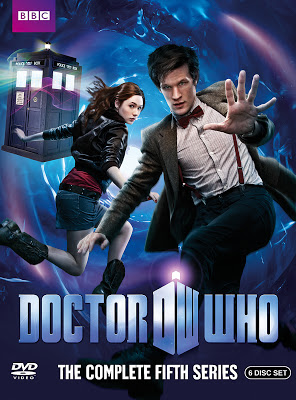 The Pitch
Matt Smith and Karen Gillan star as the new Doctor and his companion in an all-new series of Doctor Who. After his explosive regeneration, the Eleventh Doctor awakes to discover his TARDIS is about to crash! After falling from the sky, he pulls himself out of the wreckage to come face-to-face with young Amy Pond. The Doctor promises to take Amy to the stars. But first they must divert an alien plot that could destroy the Earth. The Doctor makes good his promise, and Amy boards the regenerated TARDIS, ready to take to the stars on a series of wild adventures that will change her life. As always, wherever the Doctor goes, his oldest enemies, the Daleks, are never far behind. They are hatching a new master plan from the heart of war-torn London in the 1940s. But they are not the only strange creatures the Doctor and Amy must face; there are also alien vampires, humanoid reptiles, the Weeping Angels, and a silent menace that follows Amy and the Doctor around wherever they go.

The Review
Doctor Who gets regenerated once again, this time with actor Matt Smith who takes over for the beloved David Tennant.  Also fresh for this season is new show runner Steven Moffet, who takes the reigns from Russell T. Davies.  These two huge changes have breathed new life into a show that was already breathing quite well on it’s own; Smith’s Doctor is quirky, clumsy, funny and charming and although not every episode is a classic, Moffet’s first season is a fantastic success.

Joined by two new companions, the Doctor faces both new and old nemeses including the Daleks and the Cybermen.  Like both the first and second seasons that introduced Christopher Eccleston and David Tennant as the Doctor, this season is a wonderful introduction to the character, and a tremendous starting point for any curious fan (but why not get all five seasons and experience all of the magic?).

Extras include new scenes in the TARDIS connecting the episodes, commentaries, documentaries, video diaries and featurettes.

Criticism be damned, Doctor Who remains to be one of the most entertaining and clever series currently on television.  Highly recommended.