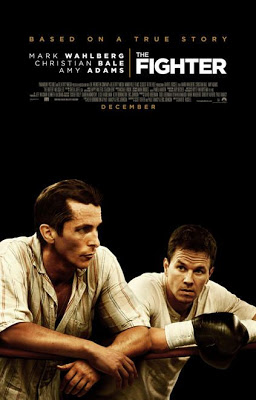 The Fighter, staring Mark Wahlberg, Christian Bale and Amy Adams, achieves something that few films do these days:  It delivers on all fronts.

The film tells the story of “Irish” Micky Ward and Dickie Eklund, boxers born and raised in Lowell Massachusetts but separated by a twelve year age difference. The driving plot of the film revolves around Micky as he tries to achieve what his brother never could—winning a world championship.

Wahlberg is fantastic in the role of Micky, although playing the soft spoken reluctant lead isn’t exactly new ground for him.  Amy Adams forges some new territory playing the crass, loud-mouthed, and even violent love interest for Micky. She is brilliantly believable in a role that is quite a departure from her usual “Enchanted” stock.

There can be no doubt, however, that the show is stolen by Christian Bale and his portrayal of Dickie.

Dickie was best known for his bout against Sugar Ray Leonard and in the film is portrayed as a worthless crack head who is still living off his local fame for having knocked Leonard down in one of the early rounds of that fight. The other thing he is known for during the time period the film focuses on is consistently flushing his younger brother’s boxing career down the toilet. Bale rekindles his Machinist roots, dropping the added bulk he was sporting the last time we saw him in Terminator: Salvation, in order to portray Dickie as the frail crack addict he was.

Bale’s ability to transform himself so much physically is nothing short of amazing and one wonders what kind of toll it’s placing on his health. As for the performance—I think the Academy is going to be hard pressed to find one supporting actor with a better performance this year, let alone five. I’m going to be shocked if we don’t see Bale in contention this season for one of those little gold statues.

Most of the film takes place during the filming of an HBO documentary on crack addiction. Chunks of it can still be found if you scour the internet, which I did, and Bale’s choices characterize Dickie perfectly. He’s charming and funny, and you like him, but he’s as tragic a tale as they come, reaching the top only to be pushed so far back down.

The film itself is entertaining. It follows a fairly typical sports drama plot, but it’s a lot smarter then one gives those movies credit for. If I could characterize the film in one comparison, I’d say The Fighter is to boxing movies what Hoosiers was to basketball movies.

The filmmakers also really deserve a tip of the cap for capturing both the feel of Lowell and what it was like there during the 90’s. The casting of locals in the supporting roles and the hair, makeup, and wardrobe choices were brilliant and made the viewer feel as though they were in Micky’s living room listening to his six sisters as they smoke and curse in their thick accents.

Which brings us around to the action in the film.

Who in geekdom doesn’t get goosebumps when they hear the Rocky theme? We cheer every time we see Rocky 4 on cable and we hear the corner yell, “HE’S CUT!!!” when Rocky delivers the punch that turns the tide. If that’s what you’re looking for you won’t find it.

That is not The Fighter.

The Fighter is smarter then that.

There are no cheesy training montages or any other clichés that are standard issue with most sports films. Even the boxing seems like a punch for punch reenactment of the actual fights.

This movie is why we go to the movies.

It’s just solid. It’s funny, meaningful, inspiring and entertaining but it’s also a simple little film. If you’re looking for that movie to check out over the holiday break, The Fighter will go the distance for you!