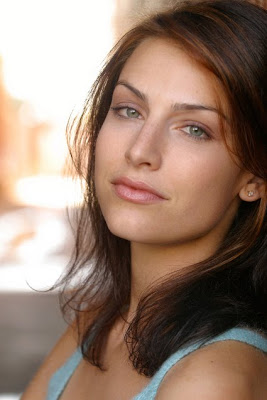 This woman can kick some ass, save the world, and still look better than you.

Having spent most of my movie-going life attracted to the sci-fi/horror genre, naturally I gravitate toward those actors who make a living performing in my favorite genres.

From 80s scream queens Brinke Stevens, Michelle Bauer, Monique Gabrielle, and Linnea Quigley to the iconic characters of Scully, Ripley, and Buffy, these are the women who I love and, who, I might add, will never waste valuable time searching for Mr. Right when there are monsters, demons, and alien’s asses to kick.

And so, of course, when I get the chance to interview an actress whose resume reads like an offering to all who bow down before the genre Gods (Frankenstein Reborn, Dracula’s Curse, 666: The Child, Invasion of the Pod People, Mega Shark vs. Crocosaurus and the upcoming Super Shark) I get a little giddy.

Not to mention, a little jealous as well (I always wanted to fight a monster shark to the death).

FOG!: You are in the next chapter of Mega Shark’s reign of terror playing opposite Jaleel “Urkel” White. What were you more afraid of, the shark or the possibility of Jaleel hiking up his pants and launching into his pop culture icon?

Sarah: Ha! I would have paid good money to see that. Remember the anti-Urkel Stephan? That is a little closer to the real Jaleel, not so scary. In Mega Shark vs Urkel, the shark wins.

FOG!: You’ve also made an additional shark movie called Super Shark co-starring with John Schneider and Jimmy “JJ” Walker (an incredible paring of 70s actors if you ask me) so I have to ask, did Jaws have a strong influence on you? Or did you sign on to the movie just to be near one of the Duke boys (which, by the way, is a perfectly legitimate reason)?

Sarah: All of the above. Jaws was a very big influence and I still have a hard time relaxing in water when I can’t see the bottom. It was more of a kwinky dink that I ended up doing back to back shark movies, John Schneider was just a bonus.

FOG!: Most of your films are heavy in the sci-fi/horror genre, are you drawn to those specific subjects? What about them do you enjoy the most?

Sarah: I love the extremes and I love the creativity. Destiny has put me in the genre and it’s been quite a ride. Hopefully it is just getting started!

FOG!: Most roles for women in mainstream films tend to fall into 3 categories: bitter wife/girlfriend, chick with a disease and the always popular, Whore with a heart of gold. In genre films however, women tend to be strong, multi-layered, and have the ability to kick some ass. Do you feel that as Geek Culture starts to become a bigger player in the media, more mainstream studios will start creating better and more complex women roles like the ones found in the films you make?

Sarah: Please, yes and Thank you (fingers crossed). I don’t dig stereotypes, but I understand them. There is a lot of grey matter. I would love to be able to be a part of the geek revolution!

FOG!: And finally, since you are becoming a well-known name in genre flicks I have to know, If you could embody one of the following Sci-fi icons who would it be and why? Ripley (Aliens), Princess Leia (Star Wars) or Wonder Woman.

Sarah: Ripley. So strong. She was not stereotypical. Or how about a Wonder Woman/Ripley Sandwich? I like that.

In this article:Horror/Supernatural, Interview, Science Fiction