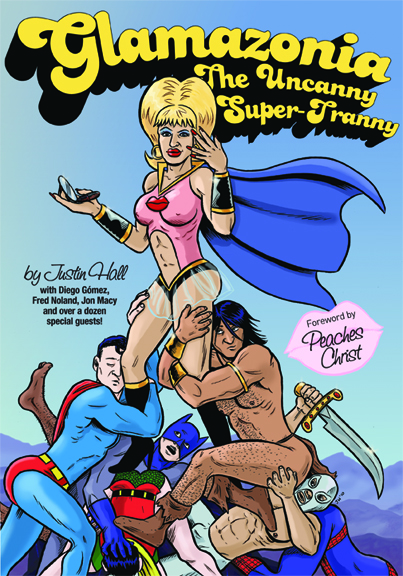 I’ve known cartoonist Justin Hall for twenty-five years (which suddenly makes me feel very old) and he has become one of the preeminent voices in Queer Comics.  He is also known for his comic book travelogues, True Travel Tales and A Sacred Text, as well as his work in the anthology Hard to Swallow.
And then, there’s Glamazonia, the Uncanny Super Tranny, which is finally coming out in a collection this month from Northwest Press.
Check out the details and the back cover after the jump.

It’s been a long and crazy trip, but Glamazonia is finally going to be in the format she deserves, a big-ass, full-color, 136 pages of campy, trashy, gratuitous whoop-ass!  The book is full of narcissistic superheroes, co-dependent sidekicks, whiny villains, sexual misconduct, wardrobe malfunctions, bitchy put-downs, politically incorrect queers, and itchy super pets, and is packed with amazing guest artists who were guillible enough to be roped into this project and have their reputations smeared forever.

The book will be hitting the stores in mid-December, and will also be available on the website of the publisher, Northwest Press.  To celebrate the release, we’re doing three events in San Francisco:
First is a reading at Mission Comics on Saturday, December 11th at 7pm.  I’ll be joined by some of the local creators who contributed to the book, Diego Gomez, Ed Luce, Jon Macy, Fred Noland, and Christine Smith, who will also read from their own works.  I’ll be making limited edition, signed book plates for the event.
Next, I’ll be signing copies of the book on the first day of its official release at the Castro comics shop Whatever… on Wednesday, December 15th from 7-9pm, with Diego Gomez.  I’ll be making another set of limited edition, signed book plates for that.
Finally, Whatever… will be hosting an “Uncanny Super Holiday Celebration” on Saturday, December 18th from 8-10pm, featuring the Northwest Press creators Diego Gomez and Jon Macy, the latter of whom will be signing copies of his graphic novel Teleny and Camille alongside the Glamazonia book.  Both Jon and I will be making yet more limited edition, signed book plates for the event, which is also a charity toy drive.  Bring an unwrapped toy and get a free comic, or buy one of the Northwest Press books and get the book plate edition.
Thanks, and I hope you can make it!
Justin

Check out Justin’s Official Home at All Thumbs Press, HERE!