For all my geekiness and, let’s face it, sarcastic ‘tude, there are times when I like to revert back to my childhood and snuggle with something in bed that isn’t trying to poke me with their “passion-filled light saber”.

But, as I am with relationships, I am quite picky with what gets to lay next to me while I am sober, so naturally I have a snuggle requirement list that looks like this:

1. Must be soft enough to rub my face on repeatedly with out giving me a rash.

2. Must not be so sickly cute and precious that I am embarrassed to wake up next to it.

3. Must be able to endure violence from my night terrors caused by all the drugs I took in the 90s.

And that is why I am getting my brag on about Tedde Bears (don’t you look at me like that).

When I first spotted them at the NYCC, I was not only excited to find a booth filled with cool stuffed animals, I also found myself instantly attracted to the bear in jeans (Franc): 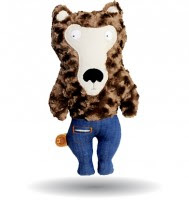 As well as a bit misty-eyed over the stuffed Bot which kinda made Eve from Wall-E look like a stand-offish bitch: 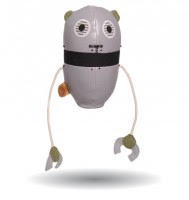 But, the winner (and the one that gets to share my non-sexual space) is Herman: 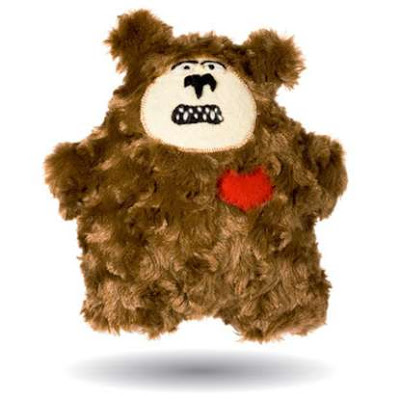 I chose him because he looks angry, seems on the verge of tearing my face off, and yet, has an applique heart on his chest that indicates that he’s capable of love (weirdly, this seems to be how I choose my men…hmmm).

What I like about the company Tedde, who makes my new strictly-platonic friend Herman, is that their mission is to completely revamp the stoic teddy bear from a boring thing that gets dumped on the floor at bedtime to a high quality stuffed animal filled with attitude and personality without it looking like it was made by an alt-crafter hopped up on their own sense of awesomeness (see any craft fair).

And the best part? Their catalog introduces their line of stuffed animals in comic book form! My God, a company that advertises itself in a way that I can completely understand, what a concept!

So yeah, I am kinda all hopped up on my new stuffed bear obsession and I’m not going to apologize for it (I will also admit to a weird attraction to smelling Strawberry Shortcake dolls as well so suck it).

Oh, and, sleeping with Herman?…better than some of the other dudes who have been in my bed.