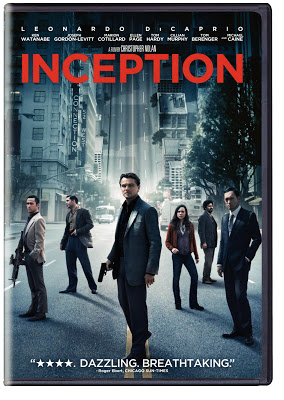 The Pitch
Acclaimed filmmaker Christopher Nolan directs an international cast in this sci-fi actioner that travels around the globe and into the world of dreams. Dom Cobb (Leonardo DiCaprio) is the best there is at extraction: stealing valuable secrets inside the subconscious during the mind’s vulnerable dream state. His skill has made him a coveted player in industrial espionage but also has made him a fugitive and cost him dearly. Now he may get a second chance if he can do the impossible: inception, planting an idea rather than stealing one. If they succeed, Cobb and his team could pull off the perfect crime. But no planning or expertise can prepare them for a dangerous enemy that seems to predict their every move. An enemy only Cobb could have seen coming

The Review
Christopher Nolan’s latest film, Inception, is many things at once.

Imagine a world where in presumably corporate espionage, reality has become science fiction, and agents can plunge into the subconscious of a given target while they sleep and extract their most private of secrets.

That is the world in which Dom Cobb lives and works, as the very best extractor around.

But what if the client wanted something different?   Instead of extraction, could Cobb perform inception, the planting of an idea, so deep that the target would believe that they originated said idea?

Without wanting to spoil the film in any way, Inception is one of the most interesting films of the year.

Essentially a heist film, DiCaprio’s Cobb (in a role that unfortunately mirrors the similar character arc of Shutter Island) assembles and leads his team into three levels of the mind to perform the inception.

DiCaprio continues to astound me with his talent and with every performance, he just gets better. The rest of the ensemble is spectacular. Former Nolan players Cillian Murphy, Ken Watanabe and Michael Caine join Joseph Gordon-Levitt, Marion Cotillard, Dileep Rao and Tom Berenger in memorable performances. Ellen Page centers the film as Cobb’s architect, hired to design the dream labyrinth for the job and Tom Hardy is mesmerizing as Eames, a forger who Cobb brings into the crew.

The film is visually stunning, but emotionally cold, nevertheless, it warrants multiple viewings to truly examine the layers that Nolan has infused.   Extras include four featurettes.

Inception is a film that needs to be studied and certifies Nolan’s talent as not only being one of the rare filmmakers that can not only create blockbuster popcorn entertainment, but also create art that is open to interpretation, discussion and respect.