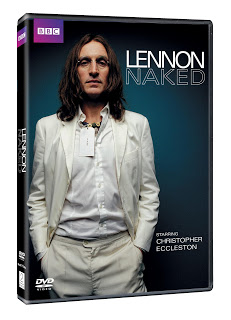 The Pitch
Become a witness to the life of one of the most enduring figures of the 20th Century, John Lennon, in the riveting BBC DVD release – Lennon Naked. Christopher Eccleston (Amelia, Doctor Who) stars as the enigmatic musician, peace activist, visual artist and author, a man whose personal life was never short on drama, intrigue and eventually, conspiracy. Written by Robert Jones (The No. 1 Ladies’ Detective Agency, Death in Holy Orders), the drama covers the years from 1964-1971, a period of wildly fluctuating fortunes for Lennon, a time of worldwide adulation at one extreme but frustration and despair at the other. From the death of father-figure and manager Brian Epstein (Quantum of Solace), his breakup with first wife Cynthia (Lark Rise to Candleford, Return to Cranford), his fascinating love affair with Yoko Ono (Torchwood, Absolutely Fabulous) through to his spiraling drug use and decision to leave England for New York, this drama charts his transition from Beatle John to enduring and enigmatic icon.

The Review
Lennon Naked is a ninety minute look at the parental issues that emotionally plagued John Lennon and how they nearly destroyed him before he permanently fleed to the United States in 1971.  Despite a decent performance, Eccelston is miscast; he’s far too old to play the icon, no matter which wig he’s wearing.  Although The Beatles appear, both the band, ex-wife Cynthia and even Yoko are just pawns in an unsatisfying chess game exploiting the issues of parenthood as both a child and father.

Far too little time is spent exploring father figure Brian Epstein and even less on son Julian.  Much of the film deals with John’s anger and resentment toward everyone (with the exception of Yoko), triggered in part by his wayward father’s attempts to reintegrate himself into John’s life. Unfortunately, this story which covers a fair amount of time is reduced to a series of somewhat random vignettes without much of a narrative thread other than a balloon in the sky, symbolic of the day that his father supposedly abandoned him, leaving John with his mother and aunt.

Stock footage and music from Lennon and the Plastic Ono band are dispersed throughout, with only a few snippets of Beatles music (all of it being pre-1964 covers of American artists).  There are no extras on the disc.

Lennon Naked is a curious rental for fans of Lennon or The Beatles, but overall, it’s a depressing effort, sloppily directed and clumsily written.