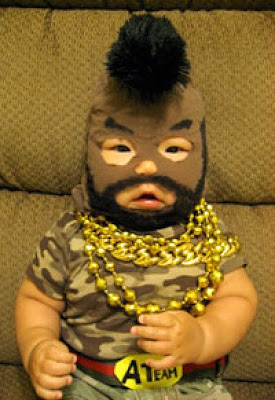 Before I begin, let me congratulate you on pumping out a healthy unit comprised solely upon your shared DNA. It truly is a miracle that the two of you were able to find another person co-existing on this planet who could stomach your interesting little quirks.

Now, about dressing your child up in fabric black-face for your own racist amusement.

I get that the idea of doing so was insanely funny to the two of you. After-all Mr. T was a cultural icon in the 80s what with Rocky III, the A-Team, and of course, his blockbuster music hit Treat Your Mother Right:

But do you think that the amount of time spent cutting out a Mr. T face from your old t-shirt (plus the hours it must have took you to marker in his beard) could’ve been better spent by, say, spending quality time with your child that you have now, inadvertently, made into a sad pathetic example of poor parenting rather than leaving said kid to wallow in his own feces while you sew up a mohawk?

Oh how the two of you must have laughed as you dressed your confused offspring up as Mr. T, (being that you were obviously drunk on Purple Drank) thinking to yourselves how brilliant it was for you to capture the moment forever in a digital format file so that you could post it on the Internet for millions of people to look at.

But I have to ask, does it stop here?

Will the taste of slight fame make you want to start dressing junior up as other television stars like Mr. Drummond from Different Strokes or maybe, even, Mrs. Garrett from the Facts of Life?

I fear that if you do so, little junior will begin to have an identity crises the likes of which should never be seen outside of an after-school special. The effect of which will culminate in your child growing up to dress solely like this: 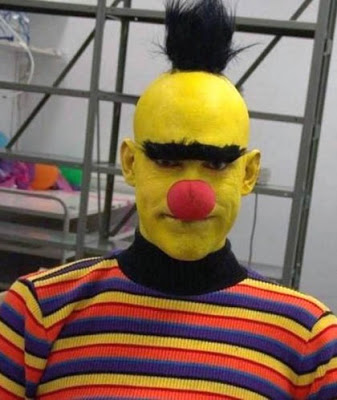 And no one wants that.

So maybe it’s time to put down the needle and thread and take the little tyke to the park and play like a normal human being.

Time will heal this wound parents, but only if you stop now.

Source: Look at this frakking geekster

In this article:Op/Ed, Photo Essay