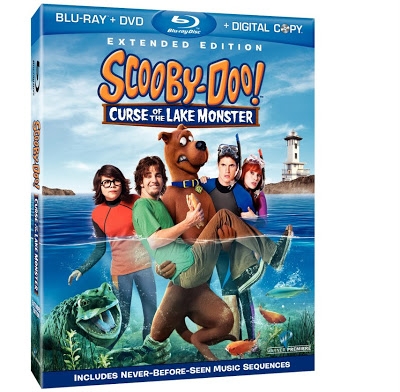 Part of me is ashamed to admit it, but I’ve seen the live action Scooby Doo films (and this film’s prequel, the origin story The Mystery Begins) several times each.

And, I look forward to seeing this as well.

MYSTERY INC. IS BACK IN ACTION!

SCOOBY-DOO! CURSE OF THE LAKE MONSTER

BURBANK, CA – (December 21, 2010) – Mystical moonstones, creepy creatures and unlikely romances are on the docket for Mystery Inc. in Scooby-Doo! Curse of the Lake Monster, an all-new, live action movie featuring an exclusive extended cut of the film with never-before-seen music sequences coming to Blu-Ray™ and DVD March 1, 2011 from Warner Premiere and Cartoon Network. A follow-up to its smash-hit predecessor Scooby-Doo! The Mystery Begins, Scooby-Doo! Curse of the Lake Monster will be available from Warner Home Video as a Blu-Ray™ Combo Pack and single disc DVD. The film will also be available On Demand and for Download.

Scooby-Doo! Curse of the Lake Monster finds the Mystery Inc. gang heading toward summer jobs at a country club owned by Daphne’s uncle, only to stumble onto strange happenings around the local lake – including an enormous Frog Monster terrorizing the locals.  There’s mystery afoot and romance in the air that only the fearful foursome-plus-one can solve. Group leader Fred, drama queen Daphne, brainiac Velma, fun-loving Shaggy and the cowardly Scooby-Doo are on the case!

In its Cartoon Network premiere on October 16, 2010, Scooby-Doo! Curse of the Lake Monster resoundingly captured all kids, boys and girls demographic ratings to rank not only No. 1 within its Saturday night time period, but as the No. 1 Cartoon Network telecast of the year to date, according to Nielsen Media Research.  The live-action and CG-animated film from Warner Premiere averaged more than five million viewers ages 2+ and nearly three million kids ages 2-11, beating all other competitive kids networks.  The performance also ranks as the most-watched telecast among targeted viewers since 2009’s original movie, Scooby-Doo! The Mystery Begins (9/13/09).

Both the Blu-Ray™ Combo Pack and single disc DVD versions of Scooby-Doo! Curse of the Lake Monster are presented as an exclusive, never-before-seen extended cut of the film specially created for the home entertainment release by director Brian Levant.

An animated creation from the legendary Hanna-Barbera studios, Scooby-Doo is one of the longest running, most beloved franchises in cartoon history.  Starting with Scooby-Doo, Where Are You! the awkward, snack-craving Great Dane and his four unique pals have been solving mysteries through 11 televisions series (the latest, Scooby-Doo! Mystery Incorporated, now airing on Cartoon Network), seven TV specials/telefilms, 15 made-for-video animated films (Scooby-Doo: Camp Scare, now available on DVD), and two live-action theatrical features (Scooby-Doo and Scooby-Doo 2: Monsters Unleashed).

“As the perfect follow-up to the monstrously successful Scooby-Doo! The Mystery Begins, Scooby-Doo! Curse of the Lake Monster is an entertaining, comically-spooky romp with all the classic moments fans have come to expect in this long-running franchise,” said Hersin Magante, WHV Marketing Director of Family and Animation. “As evidenced by a new TV series, new animated direct-to-DVD productions and this second blockbuster live-action film, Scooby-Doo is endearing family entertainment that fans continue to embrace. We’re proud to continue adding to the Scooby-Doo legacy.”

Scooby-Doo! Curse of the Lake Monster will include approximately 2 hours of entertaining bonus features, most notably:

Featurette: “Jeepers! Jinkies! Zoinks – A Tribute to the Classic Gags of Scooby-Doo” – From Scooby snacks to the unmasked villain’s iconic line, “I would’ve gotten away with it if it wasn’t for you meddling kids and your dog!”, Scooby-Doo mysteries are filled with familiar moments. Director Brian Levant ups the ante in this new film utilizing these and other signature Scooby-Doo devices to pay tribute to the very best of the franchise. This fun and nostalgic piece uses clips from classic episodes, celebrates the hallmarks of the franchise and showcases the current cast’s modern spin on these beloved characters.

Featurette: “Scooby-Doo: Rock, Rap and Rollerskates” – Get your groove on with Scooby-Doo and the gang as you go behind the scenes of the many musical moments in Scooby-Doo! Curse of the Lake Monster.  Decked out in over-the-top costumes on lavish sets, the Mystery Inc. gang bounces from a vaudeville soft shoe song and dance and a groovy 60’s frolic in a field to a Ramones-esque punk rock group and a fly 70’s funk-jam band – as well as a hilarious rap featuring the gang in their original iconic costumes from the cartoon (complete with a blonde Fred!). Toss in a roller disco spectacular set to Discovery Zone’s “I Can Be Scared With You” and fans will delight in this exclusive, behind-the-scenes look at the making of these entertaining sequences.

Gag Reel: Ruh-roh! Behind the Scenes Hilarity – Catch all the off-camera silliness, often shot by the cast on their own Flip cameras, in this side-splitting gag reel.