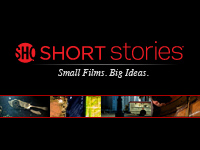 Showtime is home to some of the most original series on television, including such fan favorites as Dexter, Californication and Weeds.

Now, the cable network is home to some of the most original shorts on the web, having gathered cutting-edge content creators to tell a short story in an innovative way.

And the results are pretty impressive, showcasing the talent of some of the Internet’s top filmmakers, visual artists, and animators, including the groundbreaking Pes, Academy Award nominee Don Hertzfeldt, and YouTube sensation Levni Yilmaz.

In addition to airing on Showtime, the seven short films will be available at www.SHO.com/shortstories, on Showtime On Demand, and on mobile devices.

The seven shorts are:

After the jump check out other shorts by these talented filmmakers.

Tales of Mere Existence: A Few of My High School Teachers – Levni Yilmaz

In this article:Movies/DVD, Watch This