Welcome to the Grid, Program!

Whether it’s a long stay or short is up to you.  Though personally, I’d only pack a carry-on.

In Tron: Evolution’s story mode you play as prototype System Monitor, Anon, personally tasked by Tron himself to track down the renegade virus Abraxus who is corrupting the ISOs, Basics, and Tron City itself…

The campaign attempts to fill in the blanks on Clu’s rise to power between the original Tron and Tron: Legacy (which are hardly known for their compelling storylines) and does an admirable, if uninspired, job.  It’s simple and to the point without the techno-zen babble bullshit.

But story isn’t what drives Evolution.

Beating the ever-loving crap out of orange and yellow neon baddies with an upgradeable, glow-in-the-dark Wham-O! is definitely behind the wheel for the next 8 to 10 hours. 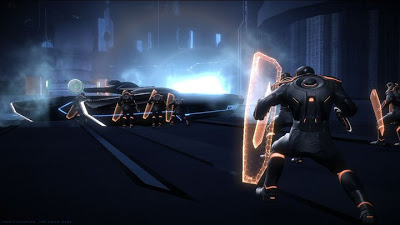 And while it is entertaining for the first 45 minutes or so, the repetitive combat blended with the whole “didn’t I just fight in this room” level design wears out quicker than Lindsay Lohan’s probation officer’s patience.

Thankfully, there are some vehicular-based sections to break up the monotony.  Unfortunately, they are few and far between and mainly consist of traveling in a straight line down a long stretch of deserted, glassy highway, playing bumper cars with enemy light cycles and dodging debris.  The Light Tank steer and shoot sequences fare a little bit better and fondly recall the downing of Recognizers in Space Paranoids at Flynn’s Arcade but ultimately leave you wanting more. 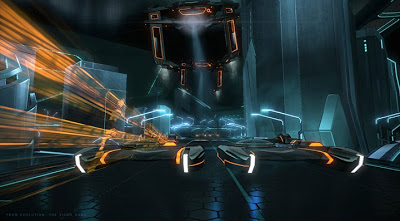 As do the controls.

In a word: wonky.

To give perspective, I find GTA IV’s controls to really suck!  These aren’t even a third as bad but can definitely lead to a frustrating death or four during some of the “Prince of Persia” inspired platforming. 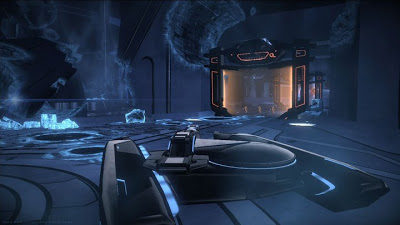 And the vehicle controls will flat-out make you question your sobriety as you wobble from side to side in a light cycle or drive backwards off an overpass in a light tank.  Annoying, but far from crippling.

Or, it could be my first-person shooter bias shining through. 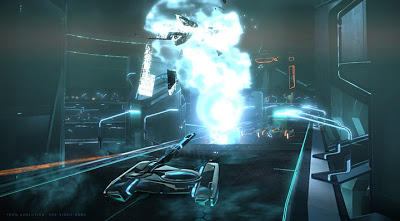 The presentation itself is a mixed bag at best.  It feels like an original Xbox game that was ported to the 360.  Character models range from not-too-shabby (Anon) to mediocre (pretty much everyone else).  The neon-outlined environments do pop but don’t offer much in the way of variety.

Sort of like playing a game that takes place in the Fortress of Solitude.

Disappointingly, the soundtrack only seems to feature a pair of Daft Punk compositions that stand out from the majority of the game’s fairly generic score.

Overall, Tron: Evolution plays like a game that was rushed out to synergize with Legacy’s release date.  But if anything, its concept is solid and shows the promise and potential of future installments in the Tron video game franchise (if there is one). 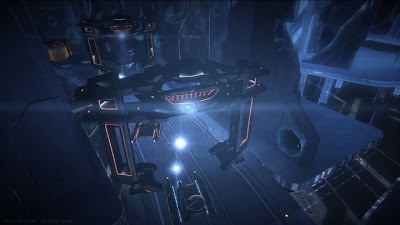 Imagine the possibilities.  Could be cool.

Though the controls would probably still suck.

In this article:Reviews, Sequels, Video Games/MMOG, Written by B.S. Walker