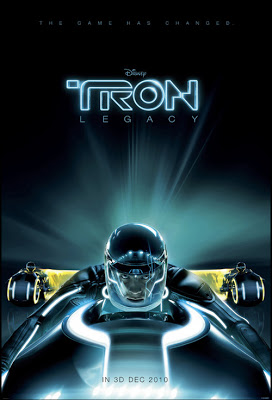 
Tron: Legacy starts promising with a strong first act which sets up up the sequel to the 28 year old original film.  Digital technology helps to create an avatar of Jeff Bridges circa 1989, reprising his role as (Kevin) Flynn, hacker and visionary and now single father to his beloved son, Sam.

One night, after a bedtime story that recalls the adventures of the original film, Flynn says good night to his son and disappears leaving Sam and company, Encom without his guidance.  Sam grows up rebellious, annually pranking Encom and with little respect for anyone involved with the company with the exception of his father’s friend, Alan Bradley (who in the digital grid is the hero, Tron).

Alan informs Sam that he had received a cryptic message originating from Flynn’s abandoned video arcade.  Sam’s investigation leads to his entrance into the digital realm and that’s where the film begins to suffer.

Bridges appears as Clu 2, Flynn’s artificial intelligence program, who has taken over the system and keeps Kevin Flynn in seclusion.

Within the grid, the now evil Clu rules and spends his days looking for Flynn, who remains hidden; living with Wilde’s Quorra, a stunning wide-eyed program who serves as Flynn’s apprentice and confidant.

Unfortunately, digital special effects and eye candy don’t make the film any more interesting.  Once Sam is within the system, there’s a number of ideas, but no real plot or direction.

Kozinski’s strength lies with his visuals, as most of the performances feel misguided or not guided at all.  Most blatant is Bridges’ portrayal of the older Kevin Flynn as a zen hippie which feels like a rehash of his “The Dude” persona.  Michael Sheen’s brief appearance also feels like the work of an actor out of control, mugging for the camera like Johnny Depp in a Tim Burton film.

The much lauded 3D effects aren’t particularly interesting and will hopefully be another nail in the coffin for this overused gimmick.  The film lifts considerably from the Star Wars series, including some of Lucas’ misfires (Quorra is essentially an individual Midi-chlorian).

Hedlund gives a solid performance, but doesn’t have much to do except try and understand what exactly is going on.

In this article:Movie/DVD Review, Sequels