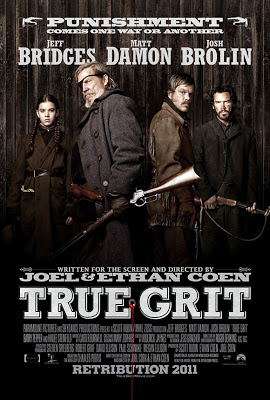 True Grit  – a retelling of the classic John Wayne film of the same title – recounts the story of an indomitable young girl, Mattie Ross (Hailee Steinfeld), as she searches for a law-man with “true grit” who can aid her in capturing or killing the man who murdered her father, outlaw Tom Chaney.  Mattie immediately decides to hire Rooster Cogburn, the most brutal U.S. marshal she can find. They’re also accompanied by Matt Damon’s character, LaBoeuf, a Texas ranger hunting Chaney for other crimes.

The Coen Brothers do a great job of capturing a traditional western feel, choosing to focus on style and character development as opposed to flash and gunfights. It really feels like you’re watching an old John Wayne movie, and the actors do a great job at capturing the time period. Bridges is salty, rude, violent and as charmingly funny as he is an unlikable bastard. Damon is great as a man on a quest to prove himself, and to live up to the integrity he feels is required in his role as a Texas ranger.  Steinfeld steals numerous scenes and carries the beginning of the movie with pure brilliance; the scene in which she shrewdly negotiates the price on some horses belonging to her father is worthy of an acting nomination on it’s own.

Unfortunately, once the film changes gears and the actual pursuit begins, young Mattie seems to be more of an observer than the force of nature she is in the beginning of the film.

True Grit, however, is not without its weaknesses.

First off, misleading previews: the trailers give the impression that this film is going to deliver on one front—grit. I, for one, expected to see the next Unforgiven. The scene in the trailer when Bridges peers down over a dying boy and, as the boy asks for help, says, “I can do nothing for you,” before coldly putting a bullet in him was reminiscent of Eastwood telling the wounded Gene Hackman, “deserves got nothing to do with it,” before blowing him away (the Eastwood scene being one that still gives me goosebumps).

Too bad that former scene isn’t actually in True Grit—tricky editing in the preview plays the scene out differently than it actually happens. It’s not the biggest deal, but I personally enjoy a movie less when I go into it expecting one thing and I get another. True Grit has a lot of good things going for it, but it’s not very hardcore. It’s no Unforgiven, as I would have wanted and expected; in tone, it’s closer to Butch Cassidy and the Sundance Kid.

My other issue with Grit is the ending.

Without giving any spoilers, I’ll say the film invests so much time in the preparation for the hunt and with the hunt, that the ending feels very rushed. Brolin has third billing on the poster but has maybe five minutes of screen time. I can’t go into more detail without giving things away, but the ending is anti-climactic, and a bit of a disappointment.

Overall, True Grit is a great film. I want to watch it again, and I think going into it knowing what kind of a film it is will allow me to enjoy it more.

I don’t think it’s as good as a few other films that came out this year, and, if you only see one movie this season, see The Fighter.

If you see two, see Grit – you will most certainly be entertained and get to see some great character pieces for that ten bucks.