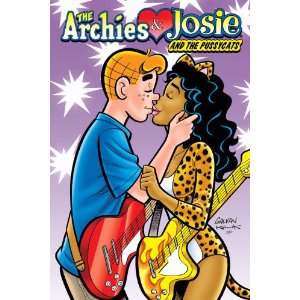 Written by Dan Parent with Bill Galvan on art duties, Archie/Josie and The Pussycats shamelessly attempts to pull you in with a cover that promises multicultural controversy. Unfortunately, the potential for social commentary is foolishly side stepped in favor of clumsy rom-com near misses and quick resolutions.

When the pop band The Archies are given the opportunity to co-headline a tour with the rock trio Josie & The Pussycats it’s like a horribly dated match made in tambourine heaven. That is until Valerie (the chocolate guitarist of The Pussycats) and Archie Andrews (so white he has red hair and freckles) lock lips during an intimate jam session. When (long time Archie paramours) Betty and Veronica, find out about his affliction of the jungle fever, what chance do the brunette and blonde have once Archie goes black? (I’ve heard that there is a 99.9% probability that he might never go back.)

While Parent addresses the color issue in his afterword, not once is the idea expressed in the book itself. This is pretty disappointing because it shows that the publishers at Archie Comics are willing to exploit cultural diversity but won’t bother tackling it. This wouldn’t be too much of a problem if the entire Archiverse applied the same “don’t ask, don’t tell” philosophy to every title but they don’t.

Just recently, Riverdale was introduced to its first homosexual character. Instead of turning a blind eye for the sake of the straight guy, they actually acknowledged it (albeit, in an antiquated sitcom manner).

This uneven approach has to beg the question, “Why is one attempt at diversifying the Archiverse worth acknowledging more than the other?”

Maybe by the time Archie’s editors got around to tackling the topic of homosexuality they had had time to learn from their truth-less Valerie/Archie faux pas; maybe the whole thing was yet another in a series of sales gimmicks. Or maybe the creators would rather continue to idealize the four-colored world of Riverdale, USA instead of call more attention to the citizenship questioning bigotry that still fuels the real world. Either way, an opportunity to make Archie and the gang relevant is, once again, missed.

Just about a week ago, Archie Comics freed itself from the self-censoring committee that comprises the Comics Code Authority. While most companies within the funny book industry would see this as an opportunity to raise the maturity level of some of their titles, Archie Comics openly stated that the change would not re-shape their content. While not surprising, this is slightly unfortunate news seeing how the publisher’s kid gloves approach to social and political commentary could educate their young fan base on the climate around them. Instead, stories such as the interracial relationship collected in The Archies/Josie & The Pussycats will continue to lack the outspokenness that would enlighten their modern teeny-bopper audience.