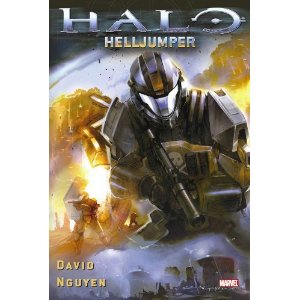 At the risk of generalizing, most video games have crap stories. Sure they are fun to play but in terms of groundbreaking plot mechanics…they fail. For that reason, I usually avoid video game comics like the Flood. However, when one of comic’s most credible scribes gets on board, it raises the whole project from a glorified art book to a purchase with promise. Say “hi” to Halo: Helljumper…

Written by Peter David with art by Eric Nguyen, Halo: Helljumper tells not the story of the Spartans that comprise the bulk of the games, but the not quite as glamorous missions of the 105th division. These “Helljumpers” are kind of like a paratrooper response team — they hear the distress, swoop in for the rescue, and bitch about how the Master Chief could never do their job.

It’s all Space Marines and chest-thumping until one particular distress call comes from the science colony called “Aerial.” When a horde of alien zealots set foot on Aerial, they attack the people and leave just enough survivors for labor. The 105th division flies in to respond, only to find that the colonists are being forced to dig for some mysterious thing called “no-ing.” 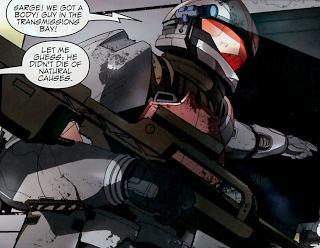 The fact of the matter is that when Peter David lays it down, you pay the @#$% attention. The man is still a viable comic legend whose track record is an education in methodical funny book writing (my personal favorite still remains his later work on Captain Marvel). With something as popular as Halo, David has the unfortunate task of taking a guarded licensed property and trying to weave something effecting to the lore. Despite these limitations, he makes a noble and somewhat careful effort.

Outside of Microsoft‘s restrictions, the biggest issue with doing a Halo comic can be those trademarked helmets. In a medium where even Spider-Man‘s mask has been known to inexplicably emote, the design of the armor limits the visual drama a bit. Always aware, David side steps the problem by providing an ongoing narration from the perspective of a Helljumper named Romeo. It adds a personal touch to what could have easily devolved into an emotionless marketing tie-in. 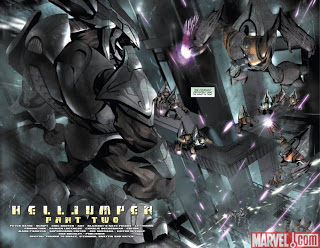 Unfortunately, artist Eric Nguyen isn’t totally on the same page with David. While the writer tries to add some sort of narrative flare to the story, Nguyen’s artwork is stiff and unresponsive. His characters tend to look too similar (even out of armor) and his action lacks urgency. That’s not to say that Nguyen holds all the blame though. There are a few plot points that you could easily accuse David of dialing in (the big reveal of “no-ing” did force me to unroll my eyes from the back of my head).

It stands to reason that a more exciting art style on a less restrictive property could have really allowed this type of story to sing. Fans of the franchise may appreciate the tempered storytelling of Helljumper but casual gamers (like myself) may feel like they ended up with the short end of the stick grenade. 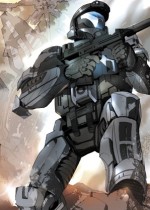