With each passing year, Hollywood aggressively shoves another comic-to-film adaptation down the PG-13 pipeline and, without fail, us nerds love to hate it. At least, until we’re proven wrong. Until then, we get all pissy about amputated continuity in movies, costume changes for flesh and blood actors, and comic writers who try to sell their movie idea within the confines of their latest comic book.

This is the problem I’ve always had with writer Steven Niles. His Vampire book titled 30 Days of Night was, admittedly, a failed movie script that Niles re-imagined as a comic. It sold itself from that moment on, spawning a feature, a few short films, and sequels. While Niles has made his home in comics, his breakthrough success has become the stuff of comic-to-film legend, but his stories have always read as, well…movie outlines. This problem plagues Mystery Society, a gothic adventure with tons of potential but low on the details. 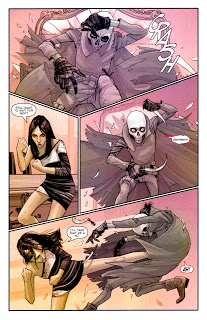 Anastasia Collins and Nick Hammond are the Mr. and Mrs. Smith of the macabre. Together, they’ve formed the “Mystery Society,” a sort of secret organization dedicated to unearthing the world’s mysteries.

Despite an ever-growing roster of freaks, telepaths, and talking boilerplates, the Mystery Society has become celebrities in their own right. However, when Hammond opts to expose a shady Area 51 cover up, Uncle Sam revs up a smear campaign to bury the clandestine operation. This leaves it up to the rest of the Society to clear Hammond’s name and expose the perpetrators.

I can’t hate on Niles for successfully infiltrating the comic book licensing gold mine (I mean, let’s be realistic…he is still an indie comic creator and that can come with a certain level of financial insecurity), but the motivation behind his writing seems kind of transparent with Mystery Society. The story is so incredibly thin, so limited in personality that it feels like a spec script looking for a producer instead a fleshed-out story. Hammond and Collins display a flirtatious Morticia and Gomez quality that makes for some amusing dialogue bits but doesn’t really provide any insight into their characters. The same can be said for the rest of the cast and the plot. While the idea seems to be to play the whole thing as a glib action-adventure, no one thing or particular person really stands out. A sub-plot involving Edgar Allan Poe’s skull speed-walks to its own conclusion and, when that big government cover up reaches it’s end, it feels like it barely got started.

The one note-worthy bit about Mystery Society is Fiona Staples’ art. Staple’s gaunt, mascara-eyed casts of characters are a perfect fit for the series. Her artistic contribution introduces amusing locales and cool looking tech (props for the little Robocop homage in the Pentagon scene). It’s Staples that seems comfortable with embracing the god damn ridiculousness of comic books while Steven Niles seems preoccupied with making the book quickly translatable to another medium. 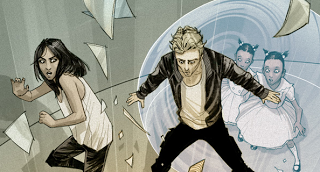