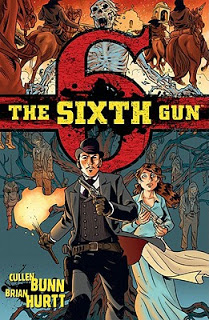 Somwhere around the Shusters and before variant covers, I’ve been told that there were these icky things called “westerns” within the comic book medium. In the existing industry, the genre still has a few cowboys sauntering about but, for the corner of fans who need their action leathery and two-fisted (!), there isn’t much. You’ve got the occasional Garth Ennis love letter, Lone Ranger, the critically-acclaimed Jonah Hex, a modernized Rawhide Kid, and — what else? Well fortunately, Oni Press has the answer with a vigorous ongoing series titled The Sixth Gun.

Collaborators Cullen Bunn and Brian Hurtt tell a tale of dark magic under the backdrop of America post-Civil War. Apparently, the war contained tons of supernatural secrets. Spirits of dead soldiers, magic wells, and guns that capture souls, murmured underneath the land. However, no secret was more disturbing than the legend of Confederate General Oilandar Hume… 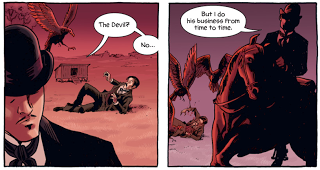 In life, Hume was a real bastard — an amazing war strategist that became the stuff of Union nightmares. Despite his boogey man status, Hume didn’t escape Northern aggression but he did escape the after-life by manipulating the dark arts. Resurrected by his ageless wife, Oilandar is in pursuit of one of six guns that can unlock a “treasure” buried inside an abandoned war prison. In his way is Drake Sinclair, a former member of Hume’s posse turned ghost/bronco buster.

Sinclair is very much the cowboy anti-hero. He drinks and gambles in his spare time, makes as few friends as possible, and would sooner turn a profit than keep his word. At his side is Becky Montcrief, the inheritor of the sixth gun. 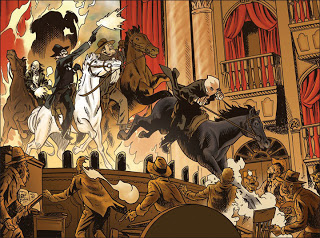 As a fanboy raised on capes and tights, I’ve always avoided the western comic genre, yet Hurtt and Bunn converted me within the first couple of pages. They provide an exciting look at a world within a world by creating gutsy characters to guide you through the paranormal process.

The Sixth Gun feels like a western but is paced like a big-budget blockbuster. The action is consistent and furious (especially its massive finale) and is supported nicely by Hurtt’s sense of motion and distinguishable character designs. It’s evident that the writer and artist are totally in sync (they previously worked together on The Damned) and that this series will honor the struggling funny book tradition by injecting it with infectious enthusiasm and tons of atmosphere.