Since the BBC revived Doctor Who in 2005, there has been a special every Christmas.

Under Russell T. Davies, the specials were always huge adventure stories with very broad characters. Yet for all their bombast, the Davies Christmas specials seemed to lack an element necessary for any Christmas special to be considered classic: true Christmas spirit. 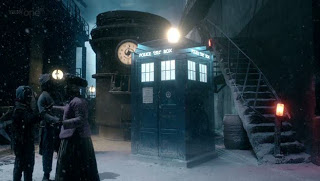 Moffat’s reworking of Dickens’ classic tale is bold in its ambition and unabashed in its emotion. It’s also much cleverer than any of the previous specials, owing to Moffat’s particular skill in writing time travel. The stakes are pretty high–the lives of thousands on a crashing starliner, including Amy and Rory–but Moffat is more interested in telling a story with real feelings, of how the seemingly insignificant details of one life can affect so many. Or as the Doctor puts it, “In 900 years of time travel, I’ve never met anyone who wasn’t important.”

In the role of Scrooge, Moffat casts the terrific Michael Gambon as Kazran Sardick, a wealthy old miser (as though there’s any other kind in these tales) who, like his father before him, loans people money and cryogenically freezes members of their families to take as collateral. He also controls the cloud layer that blankets the planet, which is composed of frozen ice crystals. (In one of the most oddball, welcome twists, fish are able to fly through the cloud layer, a seemingly throwaway detail that takes greater importance as the story progresses.) 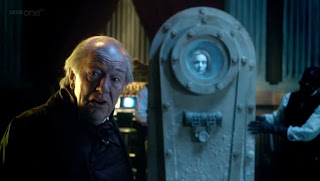 What’s brought to Sardick’s attention as he’s busy Scrooging a poor family looking to have their daughter unlocked just one night for Christmas is a luxury starliner caught in freefall through the cloud layer and less than an hour away from crashing. Amy Pond and Rory Williams happen to be aboard that craft on their honeymoon–Amy wearing her policewoman costume from “The Eleventh Hour, Rory in his Roman attire from “The Pandorica Opens”; for “a bit of fun,” as Rory puts it–and send a distress signal to the Doctor.

The Doctor follows an energy beam lancing through the cloud layer to Sardick’s home, and learns that a machine that only he can use virtually controls the skies above the unnamed planet. He also notices Sardick’s last-minute refusal to hit a small child, and the influence of his late, abusive father. As this world celebrates Christmas, the Doctor decides to create his own version of the Dickens classic. He travels back through Sardick’s life, changing his past and his memories in an effort to find the root of his remaining humanity and make him a better person. 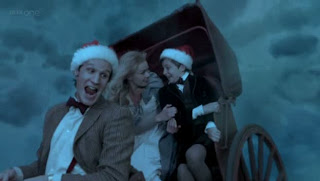 The Doctor’s plan to muck with Sardick’s personal history is really sort of a problematic idea. It’s morally dubious at best and terrifically irresponsible at worst. For the most part, Moffat explicitly dodges the questions it raises, but through Sardick’s reactions and protests, both the writer and Gambon are able to explore both sides of the argument–whether the Doctor should even be attempting this, and if it is ultimately for the best.

The Doctor and young Kazran, in an attempt to view the fish flying through the fog, are pursued by a great white shark that eats half of the Doctor’s screwdriver. The shark chases the pair into the elder Sardick’s cryogenic vault, where they release the young girl from earlier in the episode, Abigail (singer Katherine Jenkins in her acting debut), who is able to calm the shark through her singing. Kazran is taken with Abigail and promises her that he and the Doctor will spend every Christmas Eve with her, a promise the Doctor honors even as Kazran grows into young adulthood. Meanwhile, the present Kazran is left to relive the memories now being created by the Doctor, and to reconcile them with the life he knew previously. 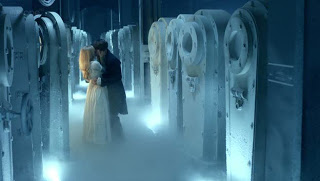 The scenes with the Doctor and his new Christmas companions are very touching, recalling “The Girl in the Fireplace” with their themes of chronologically disjointed relationships, as well as with their sweeping romanticism, especially once Abigail notices Kazran has grown into a young man. The Doctor continues his role as their chaperone (similar to how the dynamic between him, Amy and Rory has evolved), and as the older Sardick follows along with photographs, the three travel to a different Christmas Eve every year.

And then one year, Abigail reveals a secret to Kazran, one that is telegraphed somewhat by the ominous countdown clock on the door of her cryogenic capsule. Suddenly, all of the Doctor’s progress is wiped away as Kazran follows in his father’s path. 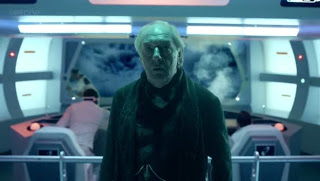 As Christmas Past fails, the Doctor’s plotting grows more desperate as he uses Amy and the passengers of the trapped ship as his Ghosts of Christmas Present. Failing that, he uses a truly inventive way of showing bitter old Kazran his future, a method that finally reawakens the bitter, selfish Sardick’s compassion.

In the end, the Doctor finds a way, though it isn’t without a little heartache. Sardick learns a valuable lesson about Christmas and rediscovers his own humanity. And despite the loss he suffers along the way, the special ends on an upbeat note perfect for the holidays. 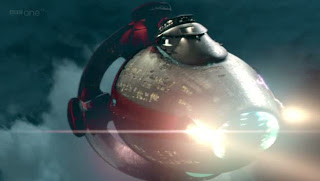 I really can’t think of anything I truly disliked about “A Christmas Carol.” The cast was incredible across the board. Matt Smith excelled in his first Christmas special, and Michael Gambon played one of the best Scrooges in recent memory. If I have any major complaint, it’s the reduced screen time for Karen Gillan and Arthur Darvill. It would have been nice to see the three of them working together for the first time since Amy and Rory’s wedding, although they made the most of their limited visibility (their cold open bit with the costumes was pretty funny).

But it’s Moffat’s inspired plotting and eye for character detail and development that deserve the most praise. Here is a story where epic romance and flying sharks can bump into each other without any pause. It isn’t about saving a world here, but saving a soul, and at Christmastime, those are the greatest stakes of all. 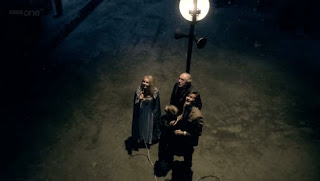 “A Christmas Carol” gave me great hope for the coming year on Doctor Who, especially with the season six teaser attached. Steven Moffat and crew seem to have worked out the kinks and are doing great work. I can’t wait for the spring, and I hope to watch the next season with all of you.