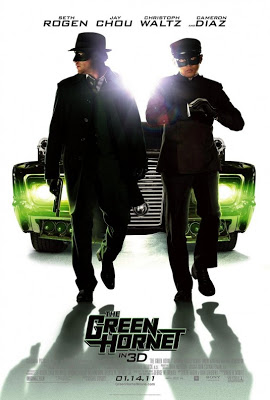 To review the film, The Green Hornet, I really think one must have two separate and completely unrelated reviews.

First, one must focus on the use of 3D in this movie.

Because this move is the epitome of a movie using 3D for no reason other than to charge the average movie patron an extra two to three dollars per ticket. I saw absolutely nothing in this movie that seemed to be shot with the intention of being in 3D. Like the majority of films that are abusing this overused gimmick these days, the use of 3D in The Green Hornet added absolutely nothing to the film, was annoying and distracting, and as a bonus—left me with one of the worst headaches I’ve experienced in the last few years.

Please studios, stop shoving this fad down our throats, nobody but your accountants are fans of it.

Now, to review the actual movie, The Green Hornet.

I went into this film with high hopes and low expectation. I didn’t think much of the trailer when I saw it a few months back, and those dreadful Burger King adds where Rogen accidentally fires a missile from the car while taking it through the drive through were pretty irritating.

However, I’m happy to report that my expectations as well as my hopes were exceeded.

I love Seth Rogen and my love for Martial Arts rivals my love for comic books. I’m happy to report that, in properly representing these categories Hornet did not let me down.

The film has some minor issues such as pacing, but in a movie like this, honestly who cares. We’re not watching Shakespeare here. I am of the opinion that when one sees a movie, one must have an opinion of a film based on the type of film that it is. The worst review of a film I ever read was one where a critic used some wordy diatribe to complain that the plot in Die Hard With a Vengeance wasn’t believable.

To that I say—Really? Part three of the movie about a guy, killing terrorist in a building didn’t have an L.A. Confidential level of plot intricacy? Go figure.

Hornet is what it is and that is fantastically entertaining.

Staying true to Green Hornet tradition, Kato steals the show. His martial arts are fast, exciting, and not overly flashy or goofy like they sometimes are in a film of this genre. More than just the traditional Kato coolness, Jay Chou really nails this role. Chou plays Kato with a cool stoicism and internalized emotion, bringing with his superb acting a third dimension to the role that you don’t need glasses to see and one is far superior to the 3D the posters emphasize on.

Seth Rogen does pretty much what he does in every movie he’s in, and like Michael Cera, he cracks me up every single time he does it!

The Green Hornet is hilarious throughout. The action kicks ass, is thoroughly entertaining, and actually very hardcore. When we live in a decade where Predator movies commit the sin of wussing themselves down to a PG-13 rating, it’s nice to see a movie like this where they actually kill a ton of bad guys. The car is very cool too, even if it reaches a Blues Brothers level of over-the-top capabilities by the end. The gadgets are fantastic! I immediately started thinking about how I could inject paintballs with gas and make The Hornet’s signature weapon.

Although one that we all hope will not be in 3D!