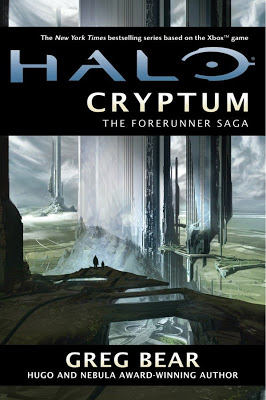 How do you spin off a successful video game franchise into legitimate science fiction literature?

Having Greg Bear write it is a damn good start.

This week, Bear launched the first part of his Forerunner Saga, a trilogy under the Halo: Cryptum banner.

Full details after the jump.

The start of an all-new trilogy in the New York Times
bestselling “Halo®” series!

“I basically said, we want someone of Greg Bear’s caliber, that hard sci-fi grandeur that he handled so well in Eon and Anvil of Stars…for us it was like deciding to write a story about British teenage wizards and being handed J.K. Rowling.”

The New York Times bestselling “Halo®” series, based on the hugely successful Halo videogames franchise for the Xbox 360, has sold millions of copies, part of a global phenomenon that has dominated the science fiction landscape over the last decade. Tor Books has proudly partnered with Microsoft and 343 Industries to publish every book set in this iconic universe, and today we are thrilled to announce the publication of the most-anticipated novel in the series yet, the first in a new trilogy from legendary Hugo and Nebula-award winning author Greg Bear:

HALO: Cryptum begins a three-book arc set in the era of the Forerunners, the ancient and enigmatic creators and builders of the Halos, and the events leading to one of the great mysteries of the Halo universe: their complete disappearance from existence. Devoted fans of the books and games will be introduced to wholly original characters and aspects of Forerunner society, culture and technology previously only hinted at in the deep annals of their history and the relics they left behind.

HALO: Cryptum is the story of a young, rebellious Manipular — yet to become a part of the adult Forerunner society. He comes from a family of Builders, who create the grand technology that facilitates Forerunner dominance over the known universe. But his obsession with artifacts old and forgotten, left behind by the Precursors — long-vanished superbeings of unknowable power and intent — begins a chain of events with vast and unpredictable consequences. This is a tale of life, death, intergalactic horror, exile, and maturity. It is a story of overwhelming change — and of human origins. For the Mantle may not lie upon the shoulders of Forerunners forever…

An icon in the science fiction community, Greg Bear has penned such critically celebrated international bestsellers as Eon and The Forge of God. His recent novel Hull Zero Three was published in November to widespread acclaim. Bear’s talent for taut narratives, intellectually rigorous themes, and realistic, appealing characters shine in this all-new series that looks into the deep history of one of science fiction’s most successful franchises.

“The great part about what Greg has just begun with HALO: Cryptum is that it opens up this amazing universe that emerged from the game industry to anyone curious about HALO,” says Tor senior editor Eric Raab. “It takes place thousands of years before the games themselves, making it a great place to enter the world. And the fact it’s a human origins story from one of the genre’s masters, makes it a substantial science fiction offering on its own.”

“Halo” has emerged from the videogame world as a global entertainment phenomenon. To date, more than 40 million copies of “Halo” games have been sold worldwide, driving more than 3.3 billion hours of game play by people connected to Xbox LIVE. In 2007, the “Halo 3” launch broke all previous sales records for a videogame launch and also became the biggest day-one entertainment launch in history. In September, the “Halo” video game franchise made history once again when “Halo: Reach” generated more than $200 million in sales in the United States and Europe in the first 24 hours of its release. With a fully fleshed-out universe of heroes, villains and epic scenarios in place, the novels will continue to expand the “Halo” universe and offer a grander view of the places and characters fans have learned about from the games.

GREG BEAR is the author of some of Tor’s most iconic titles, including Eon and The Forge of God. He has won multiple Hugo and Nebula Awards for his novels and short fiction. Bear lives in the Seattle, Washington, area with his wife, Astrid, and their two children.