I was at a comic book convention in Boston when I commissioned this piece from Arthur Adams.

It was January of 1987, I was sixteen years old, and at the time it was the largest convention I had ever attended; my previous experiences being small, dimly lit, one room shows at the Hilton in downtown Providence.

The show in Boston was two full days, two whole rooms, and all of the lights appeared to be fully functional! I guess the show was technically three rooms because Adams sat in the lobby outside the main show rooms; they had positioned him at a table between the two doors leading in. 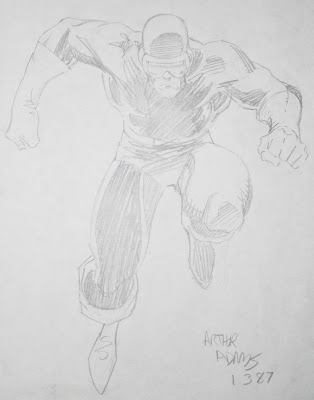 I was attending the show with my grandfather, Charles Hoyt, the person most responsible for my love of sci-fi and fantasy books.

His personal reading library was a treasure trove of the best writers in those fields, and when I was a child I pored over each and every one of them. However, his only comic book influence on me was Heavy Metal magazine, a series he still receives in the mail to this day; he gave me his complete collection back in 1993, and as I write this the latest issue sits on a chair nearby.

I think most of the content in Heavy Metal is garbage, and oddly enough so does my grandfather.

My Aunt Nancy used to buy him a subscription to it every year for his birthday, and even though he had stopped liking it he still smiled and accepted the gift from his daughter. After she died several years ago he must have taken it upon himself to continue renewing the subscription.

As I waited in line, empty handed (I owned the Longshot mini-series, and Uncanny X-Men annuals 9 and 10, but I had had no idea Adams was even going to be at the convention, so I hadn’t brought them), to ask Arthur Adams to draw something for me, I overheard the small boy in front of me ask Adams if he had ever drawn any X-Men comics.

Upon hearing that question I snickered!

I, the nerdiest kid in my school, the dumbass who asked Stephen Bissette if Swamp Thing was a Man-Thing rip off….snickered!

The boy looked hurt and embarrassed, and I instantly felt like a total tool; and then Arthur Adams glared at me.

Not as hard if I had been a fully fledged adult, I’m sure, but hard enough to for me to become even more acceptably abashed. Adams then very happily told that little boy all about his career as an artist, and that yes, as a matter of fact he had drawn the X-Men. 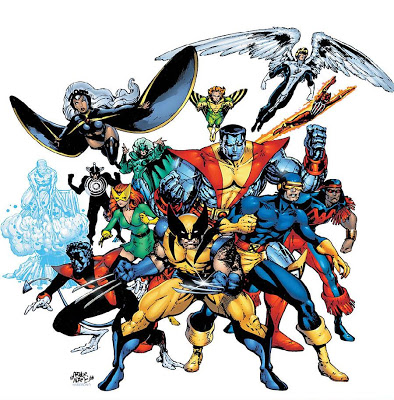 Wherever you are small boy (now probably about thirty)….I am very sorry for having been such a socially inept jackass.

At the time, my one experience with having an artist draw a sketch for me had been with Stephen Bissette.

Based on that, I naturally assumed that Adams would ask me what I would like drawn, I would tell him, and within a few minutes he would produce a piece of glorious artwork for me. Imagine my surprise, when after asking him if he could do this for me, he asked if I would be attending the show again the next day. You see, he had two other sketches to do before me, and he didn’t know if he would have time to get to mine that day.

Wouldn’t have time? It was eleven in the morning, and the convention ran until six o’clock that night!

I was not returning the next day, what should I do?

Okay, abandon all hope of getting a collage of every X-Men character ever created, just ask for the simplest (to draw) X-Men character of all time. “Could you just draw a quick sketch of Cyclops?”

I hesitantly asked. He said he would try, but he might not be able to get that done for me before the end of the day. I felt as if he was dismissing me. It was punishment for snickering at a small child. I was guilty, and one of my gods was striking me down.

I wandered about the convention floor, listened to several guest speakers (one was some guy who did voiceover work for the Robotech cartoon, and….and I don’t remember the other equally boring guests. I’m sure they were riveting), and had lunch with my grandfather. That might have taken up an hour. The rest of the day was spent at a respectful distance from Adams, but I never let him out of my line of sight.

And then, about two hours after I had asked him to draw Cyclops, I finally I saw him begin to draw; after a few minutes he tore the page from his sketch book, and began anew.

The worst part is that he was working on the piece that was two ahead of mine in the queue! Further delaying progress, anytime someone would approach his table he would stop drawing to sign their comics, and answer their questions….those damned pointless questions!

Two hours after he started, four hours after I had asked for Cyclops, Adams finished the first sketch of the day.

Then he got up, placed a “Taking a Break” sign on the table in front of him, looked straight at me, and gave me the middle finger….

Okay that didn’t happen. It felt like it happened, though! My stomach was in knots as I watched him walk around the show floor, stopping at every table, talking to vendors, talking to fans, and finally making one small purchase. Curiosity got the better of me, and as Adams made his way back to his table, I moved in close to see what he had bought.

It was GUMBY; a five inch tall, bendy, Gumby figure! What the hell did Arthur Adams need with an f*cking Gumby figure?

The answer to that question is six months later one of the greatest comics of all time would hit the comic stands…The Gumby Summer Fun Special by Bob Burden and Arthur Adams; a comic that won an Eisner award for Burden and Adams (an Eisner Award, that Mr. Adams claims he never won/received). 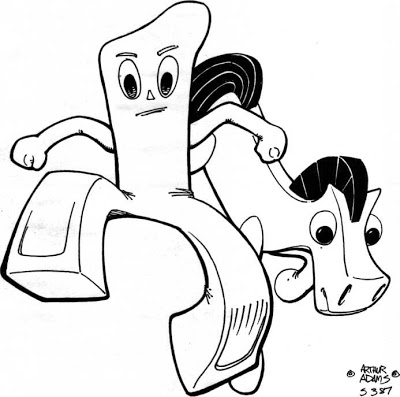 After Adams sat down I decided to approach him; I put on the most distressed looking face I could manage, forced my mouth into the most humble of hopeful half smiles, and asked if he thought he might be able to finish my piece with the few remaining hours of the day.

Art looked up at me, and said “Yeah, the other guy I have to do a sketch for is coming back tomorrow. So, I’ll do yours now.” Yes! This was hands down one of the greatest moments in my young life. He began to draw, and as I stood over him (I wasn’t going anywhere), the form of a running man began to form on the paper under his quickly moving pencil.

After a few minutes he looked down at the half finished sketch, and quickly tore it from his drawing pad. Throwing it behind him into a pile of other discarded sketches, he began to draw again. As I looked behind him at the perfectly started, unfinished sketch of Cyclops, a small spark ignited deep within my brain…”Can I have those?” I said, pointing at the cast offs.

He looked back at them in disdain, and with a tone that said “You want that garbage?” he told me to help myself.

I moved around the table and began to pick up the piles of half finished sketches. Wolverine, Longshot, Warlock, and my Cyclops made their way into my almost sweating hands! 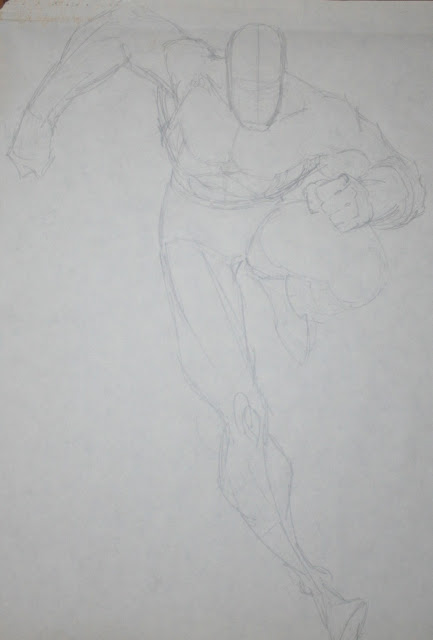 It is only now, writing this piece, that I realize Adams had not been drawing just one character all day. He was either practicing other characters or had been given “artist choice” by the first buyer of the day, and Adams had not been able to decide which character to draw for him.

I wonder what the final character was….?

One half hour after he began drawing my Cyclops, I was holding the finished piece in my hands.

I don’t remember if Adams even charged me for it; if he did, it was a token amount only.

Maybe he rushed the piece to get me out of his space, but I thought (and still think) it was a great piece of art. He only restarted the one time, and he seemed to slow down a bit for his second, and final, attempt.

What I took away from my experience of observing Arthur Adams redrawing sketches all day is that he was, and is, a consummate professional. It wasn’t because he was screwing up that he threw out all those half finished pieces….he simply wasn’t satisfied with what others would have perceived as the perfectly good beginnings of great works of art; a true perfectionist.

It pains, and embarrasses me, to tell you the final part of this story.

Back in the mid-nineties I owned a comic book store. I sold almost all of those half finished sketches during a particularly bad financial period, though I held on to the Cyclops.

I’ve never told any of my friends, and until now (this very week even) I would tell this story as if I still had them in my possession. I should have shut the doors on the store rather than sell them….

“A fool and the glory of Arthur Adams greatness are soon parted.”

You can quote me on that.

Arthur “Art” Adams was born in 1963, and is an artist of the highest caliber.  His work is available for sale HERE.  Check out some more of Adams’ art below. 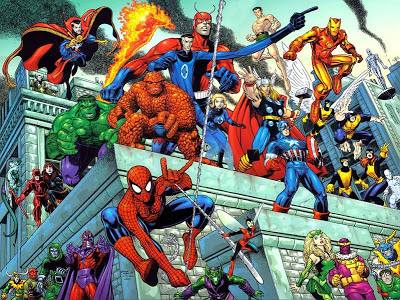 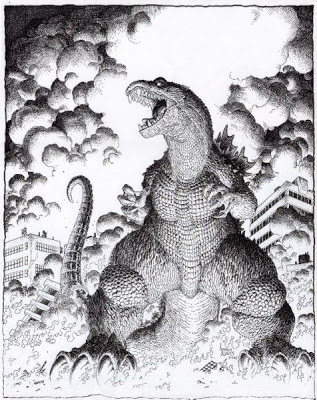 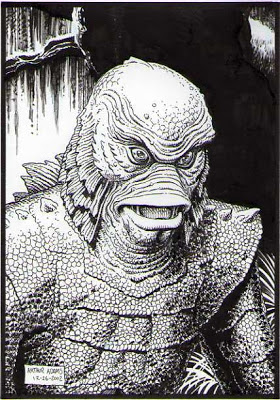 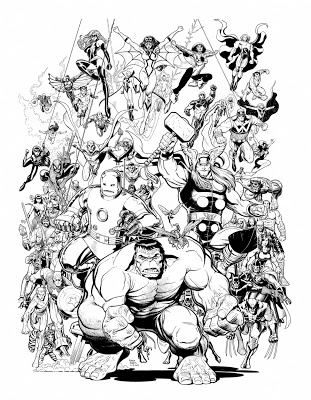 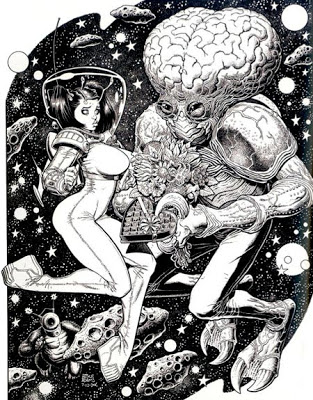 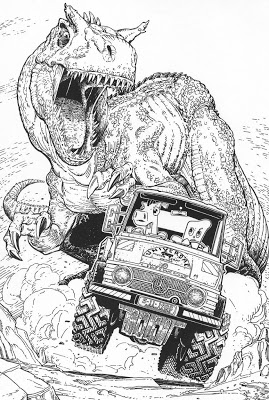 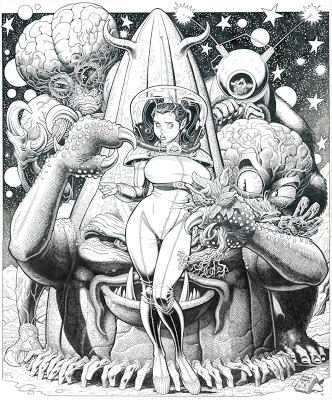