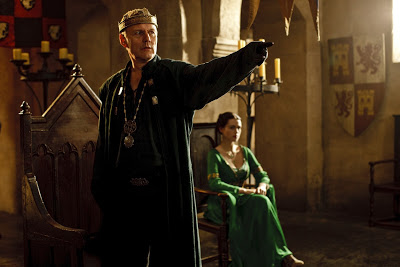 Season three sees the young wizard Merlin (Colin Morgan) in increasingly more dangerous and dark battles in his secret quest to protect Prince Arthur (Bradley James) in the fabled kingdom of Camelot where magic is forbidden by King Uther (Anthony Head). They rejoin Katie McGrath as the mesmerizing Morgana, who has a dark destiny of her own, Angel Coulby as her loyal maid Gwen, and Richard Wilson as wise Court physician Gaius. The new season sees our heroes pushed to their limits as the kingdom is thrown into turmoil by the return of Morgana from a year’s absence. As misbegotten secrets are exposed and old friends choose new sides, the battle for Camelot has truly begun.

A host of new guest stars joins the regular cast to enthrall audiences over the 13-episode run, including four actors from the Harry Potter films: Harry Melling (The Harry Potter Series) will play Merlin’s friend Gilli; Warwick Davis (The Chronicles of Narnia) assumes the role of bridgekeeper Grettir; Miriam Margoyles (Being Julia) will play Grunhilda; and Mark Williams (The Fast Show) is voice of a mischievous Goblin. Guest stars from the previous season such as Emilia Fox (The Pianist, Ballet Shoes) who plays Morgause, and Santiago Cabrera (Heroes, Che), who plays Lancelot, will also be returning for the new season.

Legendary actor John Hurt once again provides the Voice of the Great Dragon. 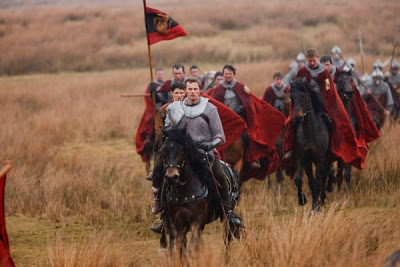 In the enchanted kingdom of Camelot, adventure reigns supreme … but on Season 3 of Merlin, so do treachery, deceit and destiny, as the magical series returns to Syfy in epic fashion.

In June, Season 2 ended with the disappearance of Morgana and the discovery by Merlin that he is heir to an extraordinary gift beyond his powers as a warlock: He is a dragonlord, able to speak with and control the great dragon who has offered him secret advice and counsel.

It was a stunning development, because although the denizens of Camelot regard Merlin as nothing more than a servant, he is destined to lead Prince Arthur to the throne and stand beside him as he rules the kingdom.

“These characters have such huge futures ahead of them, which the audience knows but they don’t,” explains Colin Morgan, who portrays the warlock Merlin as a young man. “Merlin is vaguely aware of this new kingdom that will arise when Arthur is king, and the series is very much about how Merlin grows up and the decisions he has to make.”

In the penultimate episode of Season 2, Merlin made one of the most difficult decisions imaginable when he tried to kill Morgana (Katie McGrath), the beautiful ward of King Uther (Anthony Head), who had succumbed to the temptations of evil sorceress Morgause. Only Merlin realizes Morgana’s true nature, and when she returns in the first episode of the new season, she is keenly aware of what she views as Merlin’s deceit. That leads to a compelling conflict of darkness and light, which is at the heart of Season 3.

The attempt on Morgana’s life was “Merlin’s most shameful act,” Morgan says. “It was the lowest of the low, and that’s how he feels about it – so when she comes back after this yearlong search, every emotion he has felt toward her, the shame the guild from what he did comes floating back. And we quickly find out that she’s not very happy with Merlin. He knows that she is evil, that she has chosen that path, and Morgana knows that he knows all of this.”

And yet, King Uther welcomes Morgana back with open arms, and Merlin’s status as a servant makes it impossible for him to voice his suspicions.

“Things have hardened for Merlin. He has been hurt so many times by people he loves, by his friends,” Morgan explains. “It’s hurtful for him to see Morgana take that wrong path.” 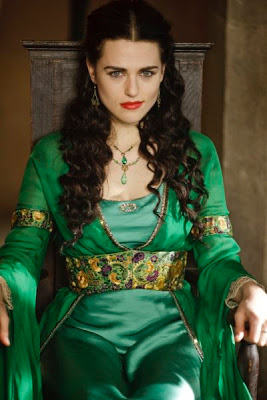 But it’s a path McGrath says she is excited to explore. “Not only is Morgana coming into control of her magic and her powers, but she’s been with someone (Morgause) who accepts her for who she is. Now she’s coming back to make everyone else pay.”