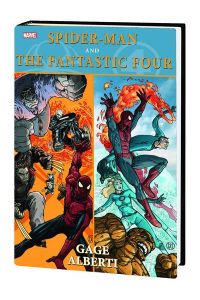 Since 1963, The Fantastic Four and the webslinger have misunderstood each other, fought, and made up to the delight of crusty fanboys everywhere. Endless with possibilities, it’s a recurring crossover formula that tends to always bring the five Marvel characters together. With the simply titled Spider-Man and the Fantastic Four, writer Christos Gage and artist Mario Alberti take a trip down 42nd and Madison in an effort to reveal the deleted scenes within Marvel’s over-involved continuity.

First up is a Silver Age adventure in which Doctor Doom has convinced the United Nations to recognize Latveria. Through some very loose plot manuevers, the FF are tasked to protect Doom during his stay in America. When Namor shows up to settle a score with Doom, the FF have to protect their evil ambassador against the Submariner on Empire State University’s campus. This, of course, brings them into contact with ESU bookworm Peter Parker/Spider-Man.

What’s interesting about Spider-Man and the Fantastic Four is how it handles the eras in which each story takes place. For example, The Doom/Namor story is quite busy with character which is typical of 60s-era Stan Lee. Like Lee, Gage allows the stories to brim with personality but remains amusingly non-commital to plot details. Gage shows an impressive amount of awareness to how comics were written. His symbiote story has a slight tinge of 1980s moodiness and his “New Fantastic Four” adventure (in which Hulk, Wolverine, Ghost Rider, and Spidey briefly replace the original members) carries some of that 90s over-indulgence throughout. (“She-Thing”…really, Marvel?) 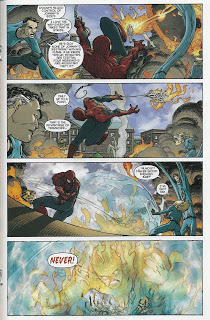 Italian penciller Mario Alberti takes a more consistent approach to his art style. While the artist doesn’t adapt a specific overall look to represent a particular period, he does embrace the costumes of that time. It’s quite a treat to see such a vibrant interpretation of arcs originally drawn by Steve Ditko, Mike Zeck,  and Art Adams (Alberti draws a mean She-Hulk and Venom, BTW).

Culminating in an unexpectedly touching finale, it turns out at the end that Spider-Man and the Fantastic Four isn’t interested in retconning but bridging. Gage digs through the exhaustive catalog of FF and Spidey adventures in order to tell something breezy and connective. In the process, he takes the piss out of some recent events, pays respect to the creators of the past, and adds his small little mark on the Marvel U. Seeing how the contemporary universe continues to be bogged down in convolutedness, it’s hard not to appreciate such modest storytelling.