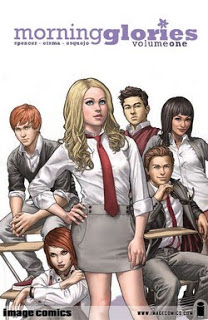 It’s almost impossible to not notice the emphasis on strong female characters inside the pages of Morning Glories. Published by Image Comics, the series sports five main anti-Penelopes compared to the three endlessly distracted male characters. A little over a decade ago, such overwhelming odds in the ♀ category would’ve almost guaranteed a story overrun with ill-tempered T ‘n’ A. Fortunately, for discerning nuevo nerds, writer Nick Spencer and artist Joe Eisma have opted to make an expressive teeny adventure that is only top heavy when it comes to pop reverence and personality.

Morning Glory Academy is like an Xavier’s School for Gifted Youngsters gone sketchy. Luring teenagers from all around with the promise of a prestigious education, the academy gets more than it bargained for with the enrollment of Casey, Ike, Zoe, Hunter, Jade, and Jun. Turns out that these six adolescents all share the same birthday…and that is no simple coincidence. When the rest of her classmates seem disinterested in this suspicious connection, fearless Casey decides to investigate. Her prying eyes put her in direct confrontation with, “faculty liaison,” Ms. Daramount. Daramount has Casey tortured for her snooping (the book can be fairly abrupt like that), revealing that all contact with the outside world has been completely severed and, in some cases, their parents murdered. 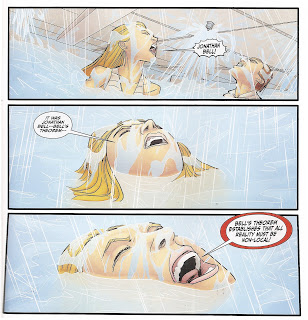 The dastardly nature of the academy is extremely nebulous by the end of Morning Glories Volume One. This makes it kind of hard to appreciate the suspense-thriller aspects of Nick Spencer’s plot. While Spencer does plant plenty of supernatural seeds (and a few passing references to  the Spanish Inquisition, which instantly made me slip into post-traumatic Lost convulsions), it’s the assembly of pithy antagonists and protagonists that keep the story moving; particularly the female ones. It’s apparent that Daramount answers to a higher authority but she remains the ball-busting figurehead of the school. On the side of good stands the tenacious Casey. While Casey and Daramount square off in a battle of wits, Zoe, Jade, and, late arrival, Julie Hayes seem far more necessary to moving the intrigue along when compared to the sex-obsessed Ike, the weak-willed Hunter, and the shadowy Jun. 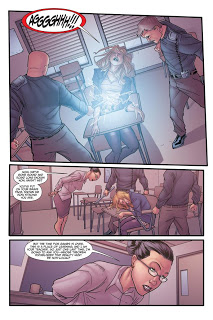 With traditional romance comics withering away decades ago and Archie comics refusing to mature beyond the holding hands phase, the modern fangirl has latched onto a new genre that doesn’t demand testosterone for admission. Titles like Y: The Last Man (with its girls-only dystopia), Runaways (in which, most of the male figures support the females), and Buffy: The Vampire Slayer (with Joss Whedon proving that he figured the formula out years ago) have successfully tapped into a female demographic that is too mature for Riverdale and too aware for the usual misogynistic superhero nonsense. Sure, guys have participated in the success of these books (displaying a level of class that seemed impossible when the shoe was on the other foot), but appealing to the girl geek seems far more key.
Pigeonholing aside, Morning Glories — with its gorgeous covers (by Rodin Esquejo), solid line art (another characteristic of these type of titles), and breezy cast of characters (that talk the way we wished we talked as teens), should have, both, geek ♀ and geek ♂ anticipating the stories continuation. Wherever the hell it may go. 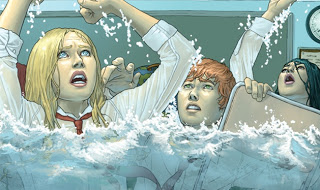