A time when geeks all across this great land rejoice, as they can get great seats at any restaurant that doesn’t have TV screens plastered everywhere.

And, of course, a time to celebrate the moments of utter stupidity that make up “America’s Game.”

And so, without further ado… the Forces of Geek present: Epic Fails of the Super Bowl!

Team Fail
The Washington Redskins during the 1940 NFL Championship. 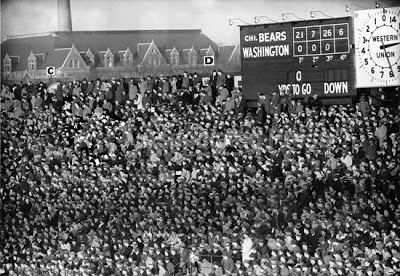 I realize that this was almost three decades before “Super Bowls” started, but still… it’s my column.

Anyway, the Redskins came into the game with a 9-2 record, including a win over their opponent, the Chicago Bears (8-3). But once the game started, the teams could not be more different. On Chicago’s second play, Bill Osmanski scored a 68 yard touchdown. By halftime, Chicago was ahead 28-0. In the second half, Chicago coach George Halas benched the starter, but still the massacre continued. When the final whistle was blown, Chicago emerged with a 73 – 0 victory.

Let me state that again: seventy three to zero…nada…zilch.

To this day, this remains the most one-sided game in NFL history. No other team, whether in the regular season or the playoffs, has ever matched the utter epic failure of the 1940 Washington Redskins. 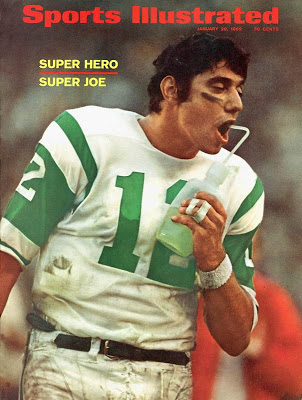 Now I realize that every team that wins the Championship gets an automatic “Team Win,” but still the Jets have a special place, because they not only won for a team, but also for an entire league. The first two “Super Bowls” were not called as such at the time, as they were played between two different leagues… the established National Football League, and the upstart American Football League. These games were played between the champions of their respective leagues. In both cases, the NFL Champion Green Bay Packers defeated their AFL opponents (Kansas City Chiefs, Oakland Raiders), cementing the common perception that the AFL was quite literally “not in the same league” as the NFL.

By upsetting the NFL’s Baltimore Colts, the Jets proved beyond a shadow of a doubt that AFL teams could compete on equal terms with their NFL counterparts. 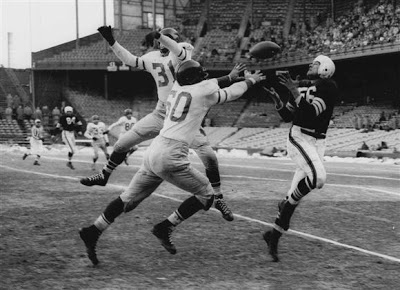 In theory, the Super Bowl is the premier game, a valiant struggle between the two best teams in the league to determine ultimate supremacy. Sometimes this actually happens…. and sometimes it becomes a debacle of poor play that would embarrass a Little League team.

Alas, SB V falls into the latter category. Both teams played sloppy games, with the Baltimore Colts committed 7 turnovers (a record for a SB winning team), and the Dallas Cowboys responding with record 10 penalties. Eventually, the Colts under-goofed the Cowboys, winning 16 – 13. To top it all off, this is the only Super Bowl with the MVP award went to a member of the losing team (Dallas’s Chuck Howley).

Is it any wonder this game lives on as the “Blunder Bowl”? 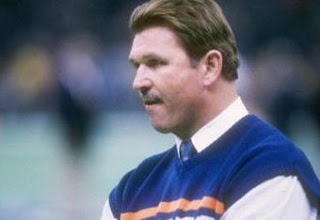 It was the third quarter of SB XX (Jan 26, 1986). The Bears were shellacking the New England Patriots 37 – 3. The Bears had one yard to go in order to score another touchdown. Instead of giving the ball to Walter Payton (a future Hall of Famer), Ditka gave it to William “The Refrigerator” Perry, a defensive lineman known mainly for his size. Perry scored.

Perhaps not a “bad” decision in terms of the outcome of the game, but in the larger scheme of things it means that Walter Payton, one of the greatest running backs ever to play the game, never got to score a touchdown in the biggest game of his life.

Consecutive Appearances Fail
In the 1990’s, the Buffalo Bills made it to four Super Bowls in a row (SB’s XXV – XXVIII). 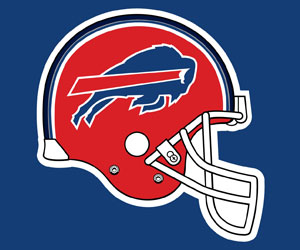 This record of four non-winning trips to the championship game not only stands for the NFL, but also for the rest of American professional sports, and has led to the joke of “Bills” standing for “Boy I Love Losing Superbowls.” 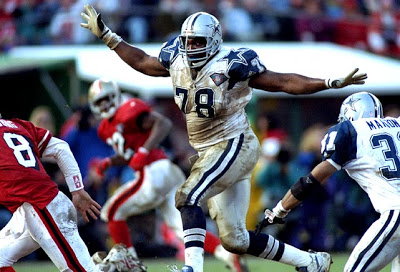 In fourth quarter of Dallas’s 52-17 romp over the Bills during SB XXVII (Jan 31, 1993), Leon recovered a fumble and started racing to the Bills’ endzone. At the 10-yard line, he decided to show off, slowing down and holding the ball in front of him. This allowed one of the Bills to come behind him, and knock the ball from his hands, thereby denying him the touchdown.

Although his play did not affect the outcome of the game, Leon’s gaffe lives on as one of the most bone-headed plays in Super Bowl history. 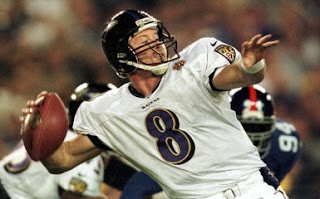 Poor Trent. All throughout his career, he was the Rodney Dangerfield of quarterbacks, viewed mainly as someone who could manage the game and minimize mistakes, while ensuring that other players got a chance to shine.

Even after helping the Ravens win SB XXXV (Jan 28, 2001), he somehow was viewed as more of a liability than an asset, and actually was cut by the Ravens. To this day, he is the only Super Bowl winning quarterback to be fired (as opposed to retire) the season after winning the big game.

As a closing thought: since they let Dilfer go, the Ravens have yet to even make it to another Super Bowl. Might the Baltimore be suffering from the “Curse of the Dilfino”? 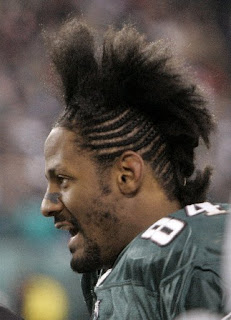 Freddie was blessed with a journeyman’s talent. He should have had a respectable (if unspectacular) career, filling a gap here, making a critical catch there, and ending his career mentoring the next generation of wide receivers.

But Freddie didn’t want a solid career, he wanted the limelight.

So he went about it the only way he knew how: by shooting off his mouth. He bestowed upon himself countless nicknames, showed up for press conferences with oven mitts on his hands, and generally did all he could to call attention to himself.

His moment of shame came before SB XXXIX (Feb 6, 2005), when he openly disrespected the New England Patriots defenders. Fortunately for the Pats, his performance in that Super Bowl was underwhelming: one reception for eleven yards. After the loss, Freddie continued to open his mouth, even taking a few shots at his own teammates.

In the end, the City of Brotherly Love decided that it had lost that loving feeling for “FredEx.”

I hope you have enjoyed this trip through the follies of Football. May you have an enjoyable time during the Super Bowl, whether you actually watch it or not.