“You’ll know it’s done when you hear the word ‘cunt’ and everyone bows.”

So began the introduction for the first preview shown to any audience of the original Broadway production THE BOOK OF MORMON, written by South Park creators Trey Parker and Matt Stone with Avenue Q’s Robert Lopez. In response to Stone’s set up, Parker clarified, “When they sing together ‘in the cunt’, and then bow–not the first time, but the last time, then you know it’s over.”

What followed was a performance in street clothes and on rough sets of the first twenty minutes of the duo’s highly anticipated musical. Six years in the making, it is the realization of Parker and Stone’s longtime dream of incorporating the history and ideology of the Mormon religion into a song-and-dance extravaganza for the big stage.

The pair is known for their fearless embrace of controversy, a predilection for vulgarity, and frequently brilliant satire. In translating their aesthetics for a Broadway audience, one might expect THE BOOK OF MORMON to boil down to an episode of South Park acted out on the stage.

Instead, what was demonstrated was a depth of understanding of the mechanics of live performance and a reverence for the medium’s traditions, without Parker and Stone’s outrageous brand of humor feeling heavy-handed or out of place. Indeed, Parker has never had a more suitable venue for his award-worthy songwriting talent and obvious love of showtunes.

The production’s first few scenes involve a tuneful “Mormon pageant” of teenage boys who have completed their requisite training and await their two-year mission assignments to spread the church’s gospel in far-away lands. Right away the boys demonstrate not only their enthusiasm for proselytizing, but a woeful naivety and ignorance of other countries.

The Elders, as they’re called, are paired up and told where they’re headed, gleefully shouting out tenuous associations with their destinations – “Oh wow, Japan? Land of soy sauce and Mothra!” The main characters are two ill-matched Mormon teens, Elder Price (handsome, ambitious, admired) and Elder Cunningham (bumbling, awkward, chubby). Informed that their mission will take place in Uganda, the boys have no idea where that is, and the music comes to halt until they’re able to come up with a visual: “Like Lion King!”

While the buddy-movie set-up isn’t exactly groundbreaking, the boys are believable in their roles, and Price tries to define their dynamic for his well meaning but clingy and uncool companion during the song “You and Me Together (But Mostly Me)”. Every dinner needs a side dish on a slightly smaller plate! Abruptly transitioning to their arrival in abysmally poor and war-ravaged “Ugahanda,” the boys are greeted with a scene far removed from first-world problems and the comforts of life in Salt Lake City.

It’s here that the first curse words of the show are spoken. In a brilliant song-and-dance spoof of the “Hakuna Matata” number from Disney’s The Lion King, the boys’ African caretaker Mafala Hatimbi and the local villagers demonstrate a customary response to the overwhelming yet commonplace suffering of their everyday lives, a saying directed skyward that translates into “Fuck You God”. The Elders view this as blasphemy, but in this case the sometimes over-the-top profanity of Parker and Stone’s dialogue feels apt; when Cunningham expresses horror at the idea of African men raping babies to cure their AIDS, Hatimbi retorts, “I know,” and flips God the bird; what else can he do?

While the audience howled with laughter, the preview ended with a joyous chorus of “Fuck you God in the ass, mouth and cunt!”

During the brief Q & A that followed the performance, it became clear that people are fascinated by Parker, Stone, and Lopez’s fascination with the Mormon faith and its believers. Half of the questions directed at the writers touched on the religion as an inspiration for their work, the implications of Mormon-bashing and the show’s potential to offend, and how large a role Joseph Smith, the religion’s founder, might have in a parallel plot line.

The trio considered places very different from Salt Lake City as a backdrop for the production, ultimately choosing Uganda as the setting for the boys’ mission. Lopez said they wanted “the kind of place that would challenge anybody’s belief in God, so you put this believe system up against the worst crisis on Earth”. Stone added, “A place where you go, wow, did God just forget about that place? They just seem to get so screwed over”. That is one of the major themes the show explores–how can the tenets of Mormonism, or any religion, hold up when confronted with such unspeakable suffering?

They discussed their intention to tell the story of the missionary boys while incorporating the history of Joseph Smith, as well as what is in the Book of Mormon itself; a challenge Stone said they are still working out. When asked how the musical ultimately differs from the South Park episode, “All About the Mormons?,” Parker explained that while the tale of Joseph Smith gets its own number, as the plot progresses the story becomes much more about the Ugandan characters and what they’re going through.

The goal was to make “a more contemporary missionary story” that was also the coming-of-age tale of these teenage boys who don’t know anything, but they think they know a lot. “It’s nontraditional subject matter, but done in a way that’s very reverent to the art form,” Stone said.

Parker explained his own interest in Mormonism taking root during his first serious relationship with a girl who was a practicing Mormon in Colorado. 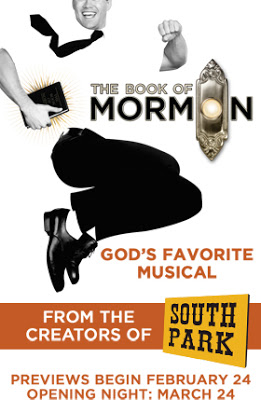 The guys reiterated they are intrigued by the youth of Mormonism and its history as a religion founded in America, by an American prophet. “To us, it explains a lot of religions in a way…we never came at this like, let’s do some Mormon bashing, because I like every Mormon I’ve ever met. Mormons are so nice…we’re not as worried about them as we are about other people. They’re just so damn nice, and they’re so much about that, and you talk to them and you’re like man, I want to feel like you”.

“It rekindles your faith to see the miracle that all of these people believe in this shit!” Lopez exclaimed.

“At the end of the day, we wanted to do a show that was not merely anti-religion, it was about how religion affects people, how they adopt it, why they adopt it, and it just didn’t seem that fun to go watch a show for two hours that just bashes Mormons”, Stone said. “I consider myself an atheist that admires and likes religion. So how do you write that into a musical? That’s what we’re trying to do”.

Opening night for THE BOOK OF MORMON is Thursday, March 24, 2011 at the Eugene O’Neill Theatre. Previews begin on February 24, 2011.  Tickets are currently on sale at www.bookofmormonbroadway.com and starting today, visit the Facebook Fan Page where fans can do daily missions for a chance to win free tickets to the show.