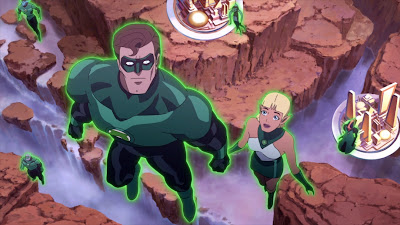 Warner Animation is releasing their own take on the Emerald Guardian of Sector 2814 to complement the summer release of the Green Lantern film.

And thankfully, they cast the man who should have played Hal Jordan, Nathan Fillion, in this release.

Fillion provides the voice of the animated film’s central character Hal Jordan, the human Green Lantern assigned to Sector 2814 (which includes Earth). Fillion has starred in several primetime television series including Desperate Housewives, Two Guys, a Girl and a Pizza Place and Buffy the Vampire Slayer. He has also developed a popular cult following as a pair of Joss Whedon’s heroic captains: Capt. Mal Reynolds in the space-western series Firefly and follow-up film, Serenity; and Captain Hammer in Whedon’s internet sensation Dr. Horrible’s Sing-Along Blog.  Fillion returns to the DC Universe after his successful turn as Steve Trevor in the animated film Wonder Woman, and has performed voice work on Justice League, Robot Chicken, The Venture Bros., and several Halo video games.

Moss gives voice to Arisia, a young recruit forced into her first mission on just her third day as a Green Lantern. Prior to starring as the ever-evolving Peggy Olson in AMC’s ground-breaking series Mad Men, Moss was featured on The West Wing, Invasion and Picket Fences. Moss has been active in voiceovers for animation with previous roles in Steven Spielberg Presents Animaniacs, Freakazoid! and It’s Spring Training, Charlie Brown!.