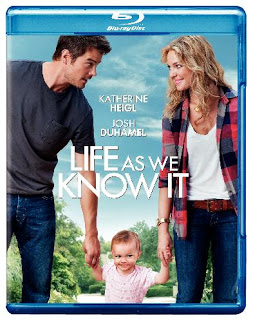 The Pitch
After a distastrous first date for caterer Holly (Katherine Heigl) and network sports director Messer (Josh Duhamel), all they have is common is a dislike for each other and their love for their goddaughter Sophie. But when they suddenly become all Sophie has in this world, Holly and Messer must set their differences aside. Juggling careers and social calendars, they’ll have to find common ground while living under the same roof. Josh Lucas, Christina Hendricks, Hayes MacArthur and Jean Smart co-star in this tart and tender romantic comedy directed by Greg Berlanti (Brothers & Sisters, Everwood).

The Review
To call Life As We Know It predictable would be, um…. predictable.

It joins Raising Helen, Three Men and a Baby, Big Daddy and countless other films where the main characters have children thrust upon them, force them to reevaluate their life and what’s important and wind down ninety five minutes later with a a happy ending.

That being said, I was pleasantly surprised that I did find the film to have a certain amount of charm.  Katherine Heigl, who has made a career choice of trying to be funny, actually puts in a solid performance, as does Josh Duhamel.  Josh Lucas shows up as Heigl’s crush who turns out to be Sophie’s pediatrician and later becomes Heigl’s boyfriend (and in a rare move, the filmmakers made him out to be a mensch).

The only thing that really bothers me about the film is that neither Heigl or Duhamel seem to grieve at all, pausing for a few tears before acclimating themselves in their place in the  dysfunctional, court appointed family.  DVD extras include additional scenes and the Blu-ray/DVD Combo release includes the DVD content, plus featurettes and a digital copy.

Despite it’s familiar plot and standard execution, Life As We Know It is perfectly harmless and somewhat charming.  Recommended.