Next month, Nemo Publishing will be releasing their newest comic, The Sea Ghost, written and illustrated by Jay Piscopo.

The character, who originally appeared in Piscopo’s The Adventures of Capt’n Eli graphic novel series, is a testament to the magic that super-heroes once had and in many ways is a love letter to classic Marvel and DC comics and Hanna Barbera cartoons.

But unfortunately, it’s also the kind of books that most comic book stores overlook, which is why you need to be proactive and tell your retailer that you want it.

After the jump, check out the cover and press release for The Sea Ghost #1, as well as a phenomenal video that Jay created for retailers, but really does a fantastic job capturing his philosophies on both his work and the industry. 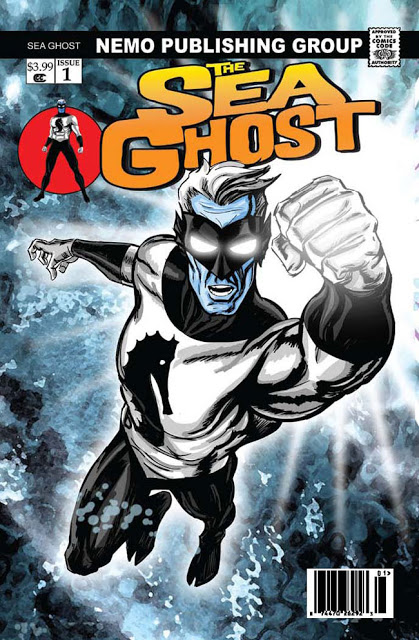 Catch the spirit!
Sea Ghost #1
“The Sea Ghost in the Machine” by Jay Piscopo

PORTLAND, ME – (November 8, 2010) – Sea Ghost discovers a dangerous secret when a mysterious sphere transports him to an alien world locked in an endless war. Can he convince the Simas and Phlan to stop fighting and unite against the real enemy? Find out in Sea Ghost #1: “The Sea Ghost in the Machine!”

Sea Ghost #1 is a 36 page, full color comic book featuring A and B covers of this aquatic superhero. “The Sea Ghost in the Machine” is written and illustrated by Jay Piscopo and includes a pin-up by legendary illustrator Ramona Fradon.  View story pages at www.TheSeaGhost.com.

Piscopo is the author and illustrator of “The Undersea Adventures of Capt’n Eli” graphic novel series. Sea Ghost is an integral character in the Capt’n Eli universe and has a long career fighting evil above and beneath the waves.

The Sea Ghost returns in “The Undersea Adventures of Capt’n Eli” Volume 3 which will be released in the spring of 2011.