Here’s something I’ve been wondering about for a long time.

I remember when the movie Alien 3 came out, there was this controversy about the original director being replaced by David Fincher (whose most recent movie is a little flick called The Social Network).

The negative vibe contributed to Alien 3 being considered a bit of a mess, which is funny now considering how low the Alien franchise had yet to sink, but hardly surprising since A3’s lowball take on the material could only suffer by comparison with the James Cameron extravaganza that was Aliens, much less the brilliant creepfest of Ridley Scott’s original Alien. 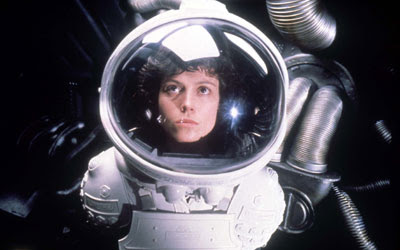 As you may recall, the first two films established the bad-assification of flight officer Ellen Ripley (Sigourney Weaver).  In Alien, she and a cat were the last survivors of an alien attack on her ship, then in Aliens she returned to the fray with a crew of space marines, and this time not only survived but saved the nicest marine and a cute little kid.

So that was a pretty heavy baton for Alien 3 to pick up: not only the fate of Ripley, but of these other two characters.

Fincher arrived late on the scene and had to contend with major interference from a nervous studio, which was well into production despite the lack of a coherent script.  Actually, there were several scripts in play, one of which had been developed to the point of constructing a massive set…then rejecting it.

I recall reading that this cancelled script (by Vincent Ward and John Fasano) had Ripley landing on a “wooden planet”—a weird medieval village full of chanting monks, which was described as something out of a Hieronymus Bosch painting.

In this world, Ripley would act the role of Sleeping Beauty, and the Alien would be the Dragon.

I thought (and still think) that was a cool idea.

Alarmed by the prospect of this bizarro fairy tale, they decided to trash the “wooden planet” and return to the more familiar engine-room design established by the previous two films.

They turned the village into a prison, and the monks into hardened convicts.

The religious angle was retained, but what was to have been a quaint monastery in space became an industrial lead-mining operation.  Unlike the other films, however, there would be no fun technology, no spaceships or shootouts—the movie would be two hours of nonstop claustrophobia and ugly mugs.

Everybody would be bald, including Ripley.

But what of her fellow survivors from the last movie, the dreamy Hicks and the adorable Newt?

They’d be dead on arrival.

Some of this was simple necessity.

David Fincher knew going in that he was screwed, that he had neither the budget nor the studio support to make the expected blockbuster addition to the Alien canon.  So he decided to murder it in its bed: kill what had come before and start small.

It was a valid artistic choice, given his options, but for most fans it was a bummer.

I personally didn’t hate Alien 3.  It had some good stuff—just not enough.

I’m always amazed when Hollywood destroys a successful franchise through nothing more than cheapness.  A3 should have been the culmination of everything we had seen to that point, and brought Ripley into direct conflict with the real source of all her troubles:  not the aliens, but the evil Company.

When I heard they were making A3, I envisioned Ripley awakening in some Company lab on Earth, which is using her as a guinea pig for their alien-breeding experiments.  But insurgents within the Company bust her out, and she becomes the leader of a rebellion to free humanity from corporate control.

Things are looking good…until the Company unleashes its newly created alien army against the rebels!  Now we’re treated to an awesome, hopeless battle between men and monsters.  The humans don’t stand a chance.  Then, at the moment of doom, Ripley realizes that she is the mother of all these aliens, that they won’t touch her.  Alone, she leads her “children” in a final assault on the Company stronghold, which is defended by humanoid robots.  More crazy-ass combat ensues.

At last Ripley faces the CEO.  He’s beaten, but he has one last trick up his sleeve: the whole place is about to be nuked.

Suddenly we see a jet copter out the window—it’s Hicks, Newt, and Jones the cat!

Ripley jumps aboard and they blast away just ahead of the mushroom cloud.

Okay, maybe not the cat.  But that’s the movie I wanted to see!

I’ve gotten a little sidetracked—why did I bring all this up?

Oh yes, it’s because shortly after Alien 3 came and went, there was another movie by the same producer, Gale Anne Hurd, and with some of the same cast, namely Lance Henrikson.

It was a futuristic prison movie called No Escape, about a convict (Ray Liotta) who is sent to a primitive penal colony–sort of like Papillon, if Papillon sucked.

The only thing interesting about No Escape was that its wooden prison village looked suspiciously like the discarded “wooden planet” from Alien 3.

So the thing I’ve been wondering about all these years is this:  Was No Escape (based on the novel The Penal Colony, by Richard Herley) only made because they wanted to recycle an expensive set?

Can anybody confirm this?

Am I the only one who cares?