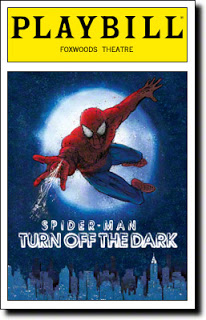 It is time to hit pause on the charity talk and put on my geek blogger hat. The wife and I saw a preview of Spider-Man: Turn Off the Dark at the Foxwoods Theater in Times Square, NYC.

Every Wednesday is Comic Day, so we made Wednesday night our comic-theater night. Our show happened to be a couple of days after the dramaturg terminators from multiple papers and publications posted some brutal reviews about the show. And those came after the weeks of mockery and mayhem from so many people who had seen it, mostly related to the string of injuries and accidents that had plagued the show for months.

Blame lowered expectations, or maybe it was my love for the source material that gave me a different perspective than theater critics focused on Julie Taymor’s career trajectory, but I thought the show was good. I liked it and I’m glad I got to see it. And yes, if the price was right, I’d see it again. I’ll pick it apart in a little more detail below, but just understand going into this review that I did have a good time.


Spider-Man: Turn Off the Dark gives us glimpses of Peter Parker’s wall-crawling origin and his early days of crime fighting and juggling a relationship with high school crush Mary Jane, all within the framework web of another character’s origin and evolution.

A mythological being, Arachne, who challenged a god, showed her up, and was punished for it, is woven into the show–or maybe she is the one doing the weaving–as a means to exploring the standard Spidey story points without falling to the expected tropes and cliches to set them all up. So rather than recreate the plot to Sam Raimi’s film franchise or a stack of selected back issues on the great white way, Julie Taymor and company have given us a new perspective, in many ways an outsiders perspective, on the Spider-Man mythos.

This was done to mixed effect, with some aspects of the character elevated or enhanced by the new lens, but other crucial Spideylore reduced to soundbytes and afterthoughts. For instance, J. Jonah Jameson and the Daily Bugle only serve the storytelling as a vehicle for telling instead of showing, as several action sequences take place entirely offstage while DB reporters describe the events. Another victim of the new perspective, Peter’s relationship with Aunt May and Uncle Ben comes across as unexpectedly tense and confrontational in the short time it is given, and Uncle Ben’s iconic lesson to Peter, “With great power must also come great responsibility,” is all but cut from the adaptation when instead it should have served (as usual, an important Spidey cliche) as the guiding mantra for his heroism.

Getting back to Arachne–because the play always gets back to Arachne, whether you like it or not–she had great power–her uncanny talent for weaving–though great responsibility never really comes into it. Unless maybe flaunting her skill to the goddess Athena, who liked to think she was a pretty good weaver herself, was an irresponsibly reckless thing for Arachne to do. But she does, and as punishment for her insolence, she is turned into a spider by the goddess. The world’s first spider, in fact. From there, Arachne becomes the weaver of a mystical, magical web in the astral plane, which allows her to look into our world from time to time, influence events, and even step into it (assuming she has the appropriate footwear). This also puts her in a position to speak to Peter Parker after he gets his spider powers. The show suggests, rather than allowing us to believe a braniac kid can plausably get super powers and have the resources to invent and maintain his own web shooters and know how to sew well enough to make his own costume, that Arachne was, in fact, the one who granted him the means (or at least the materials) to spin out his super suit.

But the show doesn’t dwell on this point too long, as it is one of many plot threads that, once you start tugging, will unravel the whole story. The biggest weakness of the show is this weak connection that ties the various moving parts together with Spider-Man. This is why the J. Jonah Jameson and Uncle Ben stuff unravels. This is also why I worry that anyone going into the show with a more limited knowledge of Spideylore may just feel lost. I happen to be enough of a dark that I can subconciously fill in the gaps of logic and storytelling that probably exist for anyone trying to compare the show to Wicked or Jersey Boys. I was simply comparing it to 30+ years of Spider-Man.

And what should have been the oddest fit for Spidey, this “brand new” character Arachne, actually worked better than I expected. Along that fragile story web I mentioned earlier, a strong case is made to connect Arachne to Peter/Spidey in a way that could translate to the comic book origin and rationale of a newly minted super villain. I could see J. Michael Straczynski adapting Turn Off the Dark with the same sensibilities that he applied to making comic-book Spidey a totemic icon, mating Gwen Stacy with Norman Osborn to make evil super clone babies, and nullifying Peter and MJ’s comic marriage via a deal with the devil. Actually, Arachne and the essence of this play’s plot would probably be more welcome in the current comic Spideyverse than any of those JMS premises were.

But this is all about the story.

Visually, I loved the set pieces and stage craft — especially the subtles tricks  of design and engineering that turned a house into a classroom and allowed two characters wallking in place centerstage to travel several blocks through their Queens neighborhood. I liked how Norman Osborn’s Willy Wonka-meets-Sgt. Pepper laboratory was juxtaposed with a sunset duet between Peter and MJ within the same scene. The theater version of spider sense in action was fun to watch and established Peter’s new powers quickly and cleverly. Even the big rubber-suited villains worked–those goofy costumes not so goofy in the context of the madcap comic book landscape established for the show as a whole. They were in the right spirit of fun and energy that the show was shooting for.

The thing I didn’t like at all and think hurt the show immensely was the wire work. 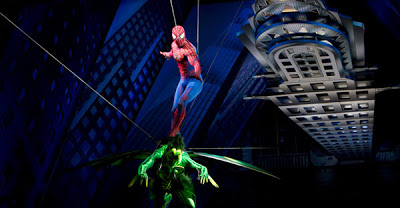 There’s nothing natural or graceful in the take-offs and landing when Spider-Man swings from his webs. And there’s no magic or illusion to those webs or any other wire work within the theater, except when the characters are set back deep within the frame of the stage and against a dark backdrop. Otherwise, it just looks like people swinging around the theater in front of the show. The wires are thick and obvious. There’s no clever weblike camouflage or lighting tricks employed to help maintain the illusion of Spider-Man in action, of the Green Goblin flying at you, or of Arachne weaving her web of mystery. Its just big, fat cables attached to actors in costumes. The most important post-previews adjustment they could make to this show would be to fix these clunky, obvious, awkward wires–the centerpiece of all of the show’s marketing and controversy.

The music is inoffensive, obviously U2-spawned, but mostly forgetable. Nothing stuck with me after the show and I can’t recall any of it besides the whiney guitar riff that plays with the TV commercials. But if I heard any of the tunes a second time, I could actually find qualities to judge them on more than recall.