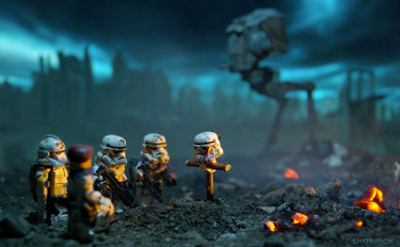 I never gave much thought to any of the Stormtrooper deaths in the Star Wars franchise. I guess I was so invested in the hero portion that the horrible deaths suffered by the pawns of Vader never made me sad (although I will admit to feeling chilly every time I hear the Wilhelm scream).

That is until I saw the above photo and it got me thinking about what it must be like for the friends of the Stormtrooper that got killed.

They must feel the same way that a platoon feels when they lose one of their own in battle regardless if they are on the side of good or bad.

So now I plan on watching the Trilogy again (not the prequels though, they can go straight to the hell I don’t believe in) and paying attention to the white armored bad guys for once.

After-all, War is Hell and every life deserves to be honored.

Even those that lock-up Leia, or freeze Han in carbonite, or get their asses kicked by a bunch of overgrown Koala bears.

But then again, maybe you just have to be there.

To buy the above print of the Stormtrooper funeral click here.