Even readers who adore J.R.R. Tolkien and C.S. Lewis may not realize that, back in their day, no one was writing the kinds of stories they enjoyed— what Tolkien called “time-travel” (what we’d call fantasy) and “space-travel” (science fiction). “If they won’t write the kinds of books we want to read,” Tolkien wrote, “we shall have to write them ourselves.”

They did, embarking on their famous novels set in Venus, Narnia and Middle-Earth long before fantasy or sci-fi would become the established genres they are today.

Like “Tollers” (Tolkien) and “Jack” (Lewis), Nick Frost and Simon Pegg are British.

And like Tolkien and Lewis, the stars and writers of the sci-fi fandom–alien road trip comedy “Paul,” also tell stories that please them.

In their latest film, it’s about two British geeks who leave San Diego ComicCon on a RV excursion through the American southwest, only to take on an unexpected passenger: the gray-skinned, big eyed, Area 51 escapee Paul (voiced by Seth Rogen, and animated by special effects). Greg Mottola (“Adventureland,” “Superbad”) directed.

“We’ve written a film that we want to watch and laugh at with out mates,” said Frost, in Boston to promote the film.

Unlike the socially-awkward, aspiring science fiction writer Clive Gollings he plays in the film, the cheery Frost sported dark-rimmed glasses that self-consciously bespoke “nerd.” “That’s always what we have always done. You find that there are pockets of ‘us-es’ everywhere.” 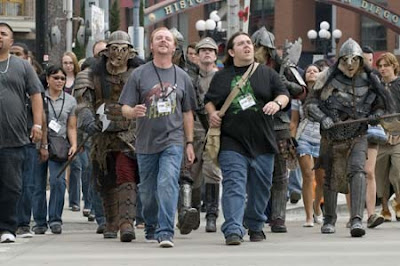 Those pockets of fanboys and fangirls will have a hard time not whispering to their theater seatmates when they spot the dozens of dorky inside jokes riffing off “Star Wars,” “Star Trek,” “The X-Files,” “The Blues Brothers” and nearly every adventure film in the Steven Spielberg canon, from “Close Encounters” to “Raiders.”

Some of the references are more “sci fi 101,” said Pegg, who plays Clive’s best friend, the wannabe comic book artist Graeme Willy. That’s to make sure average moviegoers and not just hardcore genre geeks will buy tickets. “We had to make this film appeal on a broad level because it cost a lot of money. Because of Paul, really. He’s expensive. It’s like hiring Will Smith, literally, to get Paul on the screen.”

But Pegg promised the film has plenty of obscure references too. “It’s replete with gifts for those who know their stuff,” he said. “For the faithful.”

One such nod: “Duel,” an early Spielberg film, is listed in red letters on the movie marquee of the southwestern town’s Main Street seen towards the end of “Paul.” “‘Easy Rider’ is on double bill with that,” said Frost. “‘The street we were [shooting] on was the street where Jack Nicholson meets Peter Fonda.”

Be on the lookout for an even more abstruse references, and cameos.

But drinking coffee in a hotel suite overlooking the Charles River, the two stressed that the point of “Paul” was not to ridicule those who collect samurai swords or speak Klingon (as both characters do in the film), but to celebrate them. 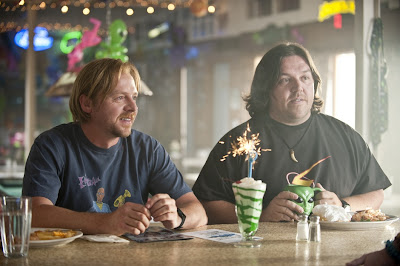 “We never wanted to make fun of it,” said Pegg. “Obviously those kind of fans are our bread and butter and helped get us where we are. We didn’t want to then turn around and say ‘Ha, ha. You big bunch of losers.’” Clive and Graeme are portrayed as mildly, and endearingly, dysfunctional and co-dependent, but ultimately good guys with big hearts.

If might be any question about their motives, both actor-writers have long ago established their geek cred. Pegg co-starred with Frost in the cop-action movie spoof “Hot Fuzz” (2007) and the “zomedy” “Shaun of the Dead” (2004). Pegg co-wrote both films and more recently voiced the character Reepicheep in “The Chronicles of Narnia: The Voyage of the Dawn Treader.” “Young Scotty,” from “Star Trek” (2009), is his highest profile role to date. (He’ll also star in the planned sequel.) Both acted in “The Adventures of Tintin: The Secret of the Unicorn,” and when this Spielberg-Peter Jackson motion-capture juggernaut hits screens later this year, each of their stars will rise even higher into the dweeby firmament.

On the set of “Paul,” two also geeked out on special effects required to bring the pot-smoking, wise-cracking space-dude to life. Rogen (“The Green Hornet,” “Knocked Up”) shot a video reference version of the movie and recorded dialogue on a sound stage, but never joined the actors on location. Instead, Pegg, Frost and co-stars Jason Bateman, Kristen Wiig, and others acted with “a child, a small man, a ball, a stick with balls on it, some lights,” said Pegg. “All the way through I was thinking, this is never going to work.”

Lining up sightlines between the eyes of humans and the yet-to be generated CG Paul (to establish believable connections between the characters) caused the biggest headaches. “How do I know where to look? But it worked.” (“You see Ewan McGregor looking at Jar Jar Binks,” Pegg said, taking a swipe at the “Star Wars” prequels. “He’s like looking above his head.”)

If one geek fantasy is finally defeat the bully, get the girl or boy, and find fame or fortune via your secret passion, then “Paul” fulfills the dream. Not to spoil the ending, but Willy and Gollings do become rock stars in their own realm.

Another holy grail is that geeks might get to hang with real wizards, orcs, hobbits, superheroes or robots. For a two hours, “Paul” brings this pipedream closer, too.

“We always see these characters in fantasy environments. We see Gollums in Middle-Earth and all the Star Wars animations are in the Star Wars universe,” said Simon Pegg. “The context fits the sprite. But in ‘Paul,’ we wanted that character to be in an environment that was totally, literally, alien to him.”

“And that makes him seem even more real,” Pegg added, “because you don’t expect to see him.” 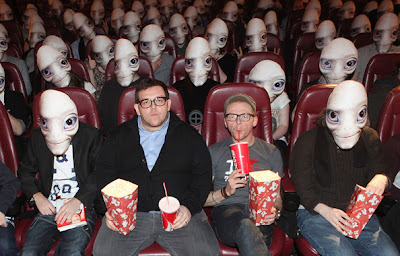 Ethan Gilsdorf is the author of the award-winning book “Fantasy Freaks and Gaming Geeks: An Epic Quest for Reality Among Role Players, Online Gamers, and Other Dwellers of Imaginary Realms.” Contact him at www.fantasyfreaksbook.com.