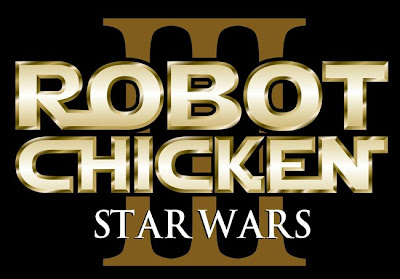 Both Seth Green and Seth MacFarlane spend an enormous amount of their time thinking of new ways to parody the work of George Lucas.

Whereas The Family Guy parodies strictly stick to the structure of the films, the Robot Chicken jokes come fast and furious, some only seconds long, and thankfully, most are pretty funny.

Now, in the worlds of Darth Vader, “the circle is complete” and the final Robot Chicken Star Wars Special is coming to DVD and Blu-ray. 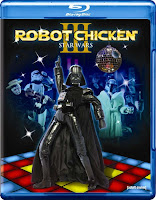 
Robot Chicken: Star Wars: Episode III broke from the format of the two previous Emmy-nominated specials. “We told a more linear story this time that covers all the Star Wars films,” says Green. “We wanted to show the Star Wars universe through the eyes of our Robot Chicken: Star Wars Emperor Palpatine, Darth Vader, Boba Fett and Gary the Stormtrooper,” says Senreich. “We wanted to get the unique perspective from people who just want to rule the universe.” This special again fuses the satirical sensibilities of the Robot Chicken stop-motion sketch comedy television series with the characters of the Star Wars universe.


Robot Chicken and Star Wars fans will cluck with delight at the bounty of bonus materials featured on both the Robot Chicken: Star Wars Episode III DVD and Blu-ray Disc including: