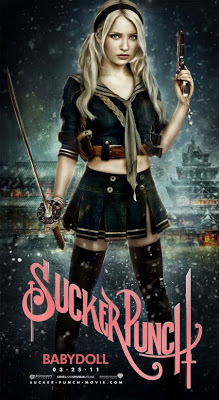 What happens when you mix Heavy Metal (that episodic, 1981 sex, rock and violence fantasy movie) with teenage boy fantasies of girls in mini-skirts kicking ass with automatic weapons and samurai swords, and a treacle-infused revenge and sacrifice plot about escape from mental institutions?

You get the chaotic, seething, psycho-nonsense that is Sucker Punch.

The premise had some promise. In the unnamed 1960s, the doll-faced Babydoll, played by Emily Browning (The Uninvited), accidentally shoots and wound her evil, molesting step father. It’s cool; she acts in self-defense. But a stray bullet also offs her little sister. Ooops. Off Babydoll goes to Victorian, thunderstorm-swept Lennox House for the Mentally Insane, hilariously located in Brattleboro, Vermont (where I once lived). Here, dozens of other girls have been incarcerated, and like Babydoll, her compatriots inexplicably have hot-sounding pseudonyms perfectly suited for our Age of Madonna and these Days of Lady Gaga. There’s the not-so-sweet Sweet Pea (Abbie Cornish of Bright Star), the chummy Rocket (Jena Malone from Into the Wild), and two others with microscopic roles, the non-blonde Blondie (Vanessa Hudgens, who appeared in the High School Musical films) and the near-invisible Amber (Jamie Chung of Sorority Row), They’re all possibly insane or, like Babydoll, abandoned by wicked step-parents.

The big, scary Lennox House is full of all the nut house clichés, from the rusty doors, peeling paint and white tile, to the oblivious orderlies, the lecherous cook (who of course is obese), and the doctor who administers the lobotomies. A megalomaniac heads up the institution (Oscar Isaac from Robin Hood). There’s one understanding psychiatrist, Madam Gorski (Carla Gugino from Watchmen), whose play-therapy shtick equates imagination with freedom. “That world you control,” she says with her Slavic accent. “That play can be as real as any pain.”

Lovers of games and genre “escapism” already get the point of fantasy: We enter these realms when, sometimes, real life’s crap bears down too hard on us. High expectations also weigh on director Zack Snyder, whose past movies Watchmen and 300 mostly pleased his fanboy and fangirl audiences. (A recent profile in the New York Times Magazine plumbs Snyder’s sudden surplus of geek cred). Clearly, he loves his graphic novels and his Dungeons and Dragons, and for Sucker Punch, he unfurls that well-trodden path of a quest for something—honor, courage, freedom—by an ordinary-person-with-extraordinary-and-hidden-gifts.

But here, more so than his other outings, Snyder is preaching, even pandering, to the converted, with wild and disappointing results.

First, you have to swallow this: More than half of the movie takes place in BabyDoll’s mind. Supposedly, to keep her sane in the loony bin, our Snow White begins to have fantasies of being a hooker trapped inside a Moulin Rouge-like whore house run by the creepy pimp (Isaac again; everyone plays at least two roles in the film). Apparently, in the girl’s mind, being a whore is a step-up. But Babydoll inserts another fantasy layer inside the first (I know, but stay with me here): a quest to obtain five items—a map, fire, a knife, a key and a fifth thing TBA. If she succeeds, she can escape the institution and bring her friends with her. This second fantasy she can only access when she revs up her erotic dance routine for the voyeuristic men. (Cleverly, Snyder never lets the audience see her sexy moves.)

When BabyDoll embarks on quest Part One, a solo adventure set in feudal Japan, she meets an unnamed “Wise Man,” the veteran actor Scott Glenn, who’s been wonderful in movies ranging from The Right Stuff, The Hunt for Red October, The Silence of the Lambs and The Bourne Ultimatum. Here, his grizzled, grandfatherly Wise Man character is Master Po/Yoda to Babydoll’s Grasshopper. “What are you looking for?” he asks, before handing over some serious firepower. “A way out,” replies the stoic Babydoll, who doesn’t break a smile all movie. Emily Browning’s wide, inviting, snow-white face, punctuated by two giant eyes, is an anime artist’s wet dream.

After defeating a trio of troll-like, giant armored samurai, Babydoll invites her ragtag galpals to join her on the next installment of heroic derring-do. Like in the Rupert Holmes song, she wants them to “Come with me and escape.” And they do: first to the zombie-infested trenches of World War I, then into a WW II –medieval castle-siege mash-up scenario, and finally on a bomb-defusing mission on some craggy rock off of what looks like Saturn.

Luckily, for the viewer, the babes march off into battle, often in slow-motion, dressed like “slovenly trulls” and “brazen strumpets” from Babydoll’s Prostitutes and Pimps role-playing game. (Check the Random Harlot Table from your Dungeon Master’s Guide for details). This set-up permits the young ladies to wear fishnet stocking and high heels as they fight undead German infantrymen and shiny robots from the future. The Wise Man reappears in each fantasy episode as quest-giver, instructing the gals where they’ll find the particular item on their wish list. He also offers advice like “Don’t ever write a check with your mouth that you can’t cash with your ass.”

In shooting his asylum/brothel scenes, Snyder composes his shots with a painstakingly, almost achingly overthought attention. But at least these shots are mostly quiet. Once the fantasy ass-kicking begins, the bloody camera can’t stay still, sweeping, pivoting, dipping, swooping, all the while shooting that jerky, “Hey, aren’t we missing a few frame of film here?” footage that’s all the vogue these days Adding to the head-throbs are the blaring remixes of classics like Eurhythmics’s “Sweet Dreams (Are Made of This),” Queen’s “We Will Rock You” and “I Want It All,” and Jefferson Airplane’s “White Rabbit.” Each fight episode feels like a video game level sponsored by a record label. Advil, anyone?

Meanwhile, the production design and digital landscapes have beensteeped—OK, soaked—in a sea of sepia. Some of it is stunning. We see some cool cross-pollination of genres. Those big samurai dudes wield “naginatas” (a pole arm with curved blade on the end, much like a European glaive) but also primitive machine guns. In that siege scene, the ruined castle is swarming with orcs and foot soldiers in plate mail; into this mess the gals air drop from a bomber plane, then kill a sleeping dragon. Back in WW I, there’s zeppelins but also zombies and an anime-inspired, jet pack-powered bipedal armored fighting machine emblazoned with a pink bunny. That’s piloted by Amber, who handles all the flying duties. At one point, when Wise Guy barks at the ladies, “They’re using steampower and clockwork!” I half expected a subtitle to pop up: “Hey Steampunk Fans: We get it!” followed by, in smaller type, “[Hey Newbies: Steampunk is a genre the uses anachronistic technology or futuristic inventions as Victorians like Jules Venre might have envisioned ….]”

That first action scene, where Babydoll faces the giants with glowing red eyes (they glow, therefore they are evil), has its pleasures. But here’s where the major flaw of Sucker Punch is revealed. There’s nothing at stake. We know each mission is a fight of fantasy. The girls are imbued with awesome superpowers—with their blades they deflect bullets from nasty German undead; they leap, slow-mo, over the crude weapon blows dealt by Japanese trolls; they are thrown across temples and train cars and tossed through stone walls; they are pummeled by shiny robots. Nary a scratch on their milky cheeks. The audience figures out these gals are impervious. So where’s the danger? Babydoll has as many lives as a video game avatar. Only towards the end do we see real death, but the moment is laughable.

Sucker Punch aims to work on the level of universal heroic fantasy epic, but it barely functions as pulp. The Sweet 16 set may get off on the “grrrrrl power” theme, and not a few boys will dig the upskirt action shots mixed with oodles of cartoon violence. But the cocktail of comic book clichés is too sour to swallow. Strong female heroines are welcome, but their impact as role models is diluted when we see their exploits are simply fantasies nested within further fantasies, like level 60 Russian Night Elf dolls.

So what are we left with? Men are horrible, predatory pervs? That they “silence” a young woman and her “voice” via real or imaginary lobotomies?

That, as the film’s PR material touts, the only resort is her “dream world” which “provides the ultimate escape from her darker reality.” Or that we should thrilled by the ambiguity of it all, because “her incredible adventures blur the lines between what’s real and what is imaginary.” Sucker Punch, meet Jacob’s Ladder, A Beautiful Mind, Fight Club, Psycho and about a hundred other movies with imaginary characters or unreliable (or insane) protagonists and narrators.

Yes, a lobotomy would be the ultimate bummer. But so is that “What chains us? Who holds the key?” voice-over doggerel right before the credits roll. “You get out there and live for all of us,” are Babydoll’s final words before her own grim ending begins.

I think even teenage girls will have more fun playing a couple hours of World of Warcraft, Halo or Portal.

Ethan Gilsdorf is the author of the award-winning book *Fantasy Freaks and Gaming Geeks: An Epic Quest for Reality Among Role Players, Online Gamers, and Other Dwellers of Imaginary Realms*, his travel memoir investigation into fantasy and gaming subcultures that the Huffington Post calls “part personal odyssey, part medieval mid-life crisis, and part wide-ranging survey of all things freaky and geeky.” National Public Radio described the book as “Lord of the Rings meets Jack Kerouac’s On the Road” and Wired.com proclaimed, “For anyone who has ever spent time within imaginary realms, the book will speak volumes.” Follow Ethan’s adventures at www.ethangilsdorf.com

In this article:Movie Review, Written by Ethan Gilsdorf