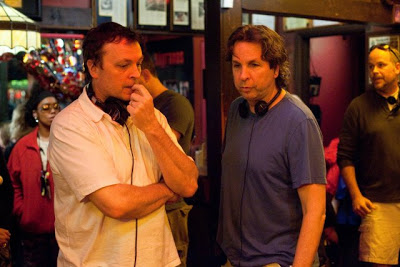 The waiting room outside of my first ever celebrity interview isn’t much of a waiting room at all and actually consists of a cramped room with about eight other reporters, all of whom have been waiting close to two hours after their appointment times. I’m trying to keep my laptop steady on my knee as I balance myself on an ottoman, when I come to the conclusion that my lower back and my sanity can no longer take it. Fortunately, it’s at that very moment that our liaison appears and I’m told it’s finally our time for the interview.

We’re led down the hall to a bigger and much more comfortable suite, and I make myself at home on the soft couch.  Peter Farrelly stands and shakes my hand.  I open up my laptop, exchange small talk with both Peter and his brother Bobby and then dive into discussing their new movie, Hall Pass.

FOG!: What originally brought you to this script?

BOBBY: The script was written by Pete Jones. If you don’t remember him he was the one who won the original project green light. He directed the movie Stolen Summer. He wrote a script and we just loved the main characters. They were just doofuses, and they were very, very funny.

Hall Pass is set in New England but it wasn’t filmed here. Where did you do the majority of the filming?

PETER:  Atlanta. But the film is still set in Rhode Island.

I did notice all the Narragansett Beer in the movie.

You noticed that huh?

So, the movie is set in Rhode Island. Did the script call for it to be set there?

No, the script wasn’t set anywhere in particular.

Most of your films are set in Rhode Island. Is that just because you’re staying loyal to where you’re from?

Well, I like to know where I am in a movie. We’re from Rhode Island.

Except for Italy. (Laughs)

We talked to a guy from Italy who said, “In Italy we have a word for ‘Hall Pass’.  It’s called the weekend.”

Also, In the movie the women go to Cape Cod. It just worked out great with the Rhode Island setting that we had a place that the women could go that was accessible, but still far away.”

Why did you choose Atlanta?

We used to have a say in where we filmed. Now the studio tells us where. Atlanta was just cheaper. And we were filming in January.

Did you know the term “Hall Pass” before you read the script?

No. But the term “Hall Pass” comes from school. One would have to raise their hand and ask for a pass to leave the room. And when you’re married you have to raise your hands to do anything.”

In the film you use the sound effect from Law & Order for your scene transitions. Was that in the original script?

No, we came up with that somewhere along the line.

We really wanted that though. That was one of the things we went back and forth with the studio on. Tell them how much it was.

We tried doing our own sound effect that sounded similar, but it just wasn’t funny.

So the guys in this movie are in their forties and end up having a week where they’re single. Is this movie based on your single selves?

No. But I do relate to these guys. We’ve both been married for 20 years. The game has changed from when we were single. This is the Girls Gone Wild generation. We don’t know what works and what doesn’t work for picking up girls.

We do watch our single divorcee friends at forty try to hit on women and it’s sad….And hilarious. You can’t go twenty years without hitting on a women and expect to be good at it.

HALL PASS is currently the number one film in the country and should be playing at a theater near you.