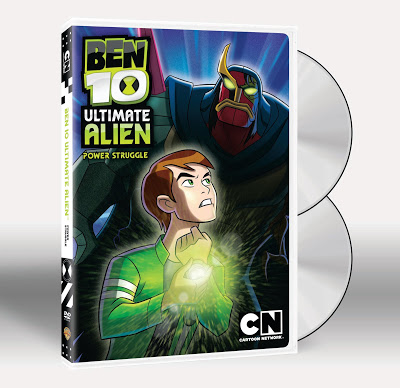 For over 100 episodes, Ben Tennyson aka Ben 10 has found with and against alien forces using the Omnitrix, a mysterious alien weapon.

On May 3rd, Warner Home Video will release the latest installment on DVD. My only complaint? The continued lack of season sets.

Featuring the Final 10 Episodes from the Ben 10 Series’ First Season as Well as an Ultimate Alien Database, the DVD Powers Its Way to Retail on May 3, 2011

An unexpected clash for ultimate power looms on the horizon for Ben Tennyson and his friends as Cartoon Network Enterprises releases to DVD Ben 10: Ultimate Alien Power Struggle.  In this latest installment of the network’s hit original series, Gwen takes the team to a dimension of magic where they are forced to rely on her old enemy Charmcaster to survive. Then, Kevin volunteers to return to the Null Void prison to settle an old score.  Finally, Ben gets angry when Gwen recruits Darkstar to help them in a final showdown that he never saw coming.  Featuring the last 10 episodes from the series’ first season and an Ultimate Alien Database, Ben 10: Ultimate Alien Power Struggle will be available as a 2-disc DVD set on May 3, 2011 for the suggested retail price of $19.97.
Ben 10 continues to be a perennial series for the network as Ben 10: Ultimate Alien ranked #1 children’s show among Boys 6-11 on Friday nights and during its fall premiere of season one, Ben 10: Ultimate Alien was the #1 show in its timeslot among Boys 6-11, according to Nielsen Media Research.  Episodes air Friday nights at 7:30 pm (ET/PT) and Saturday mornings at 7:00 am (ET/PT) on Cartoon Network.
In addition to exciting episodes and DVDs, Ben 10: Ultimate Alien fans can continue their action-packed experience off the air through the franchise’s diverse array of consumer products. This extensive line includes new toys from Bandai America, the Ben 10 Ultimate Alien Cosmic Destruction Video Game from D3Publisher, and Ben 10: Ultimate Alien t-shirts, footwear and more.

Cartoon Network Enterprises will support the release of Ben 10: Ultimate Alien Power Struggle with a kid-focused marketing campaign utilizing broadcast advertising on Cartoon Network, as well as an online campaign featured on CartoonNetwork.com.