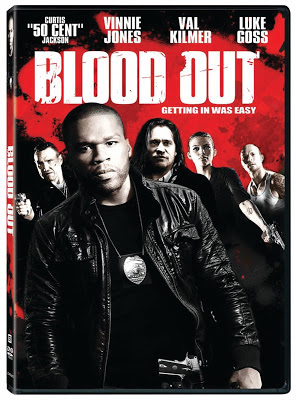 In the vein of Training Day and Street Kings, Blood Out stars Luke Goss as Michael Spencer, a small town cop who loses his brother in a gang-related murder. City police quickly abandon the case, so Michael takes matters into his own hands and goes undercover to avenge his brother’s death.

Review
To say that this film is terrible would be an insult to other terrible things.

First off, the synopsis above is so inaccurate, it gets the main character’s name wrong.  Goss plays Michael Savion.  Not that it matters.  The DVD art is reminiscent of the problem of direct-to-dvd films.  50 Cent?  Val Kilmer?  Vinnie Jones?  The three marquee names are in the film for several moments each and their performances indicate an awful lot of improvisation on the spot.

A puffy Kilmer is dipping his toe in Charlie Sheen territory, delivering what appears to be a performance under the influence of several prescriptions.  Goss is less believable as a street-wise gangsta than he is as a warning for male anorexia.  The entire film is cliché, dull and just plain awful.

And the film ends with a gladiator fight.

Of course it does.

In this article:DVD Review, FAIL