Having already attended a sneak preview in late January of select scenes of The Book of Mormon  performed without costumes and on rough sets, I was very excited to finally see the show in full at the Eugene O’Neill Theatre.

I am not a huge follower of musicals or show tunes, and having a threadbare knowledge of the history of the art form, I am certain that all but the most obvious nods to/jabs at/spoofs of other musicals sailed right over my head during the performance.

My interest in the show was due to my love of Trey Parker and Matt Stone’s animated series South Park and a genuine interest in what their wickedly clever and subversive minds would bring to the Broadway stage.

If you’re like me, and your curiosity about The Book of Mormon stems more from being a Parker/Stone fan than a Broadway theater fan, then you might wonder, “Why should I shell out the bucks for tickets to the show?”

If you’ve read any of the major reviews out there, then you already know that the majority are calling The Book of Mormon “the most critically acclaimed new musical from the past several years”.

I can’t speak to that, not being a member of the cult of Broadway; but this is a production that deserves to be supported. Admittedly, I can be characterized as something of a Parker/Stone fangirl, and while I am critical of many aspects of South Park and their “offend everyone” policy, I pretty much see some measure of brilliance in everything they do. The sneak peak I got into the first half hour of Act One gave me an idea of what the audience was in for, and as a result my expectations for the show were lofty from the outset:

For the most part, my expectations were well met.

For a show that I thought would be fairly predictable (insofar as I knew it would surely be spoofing a whole slew of traditional musical tropes and clichés–jazz hands, counterpoint duets, schlock and melodrama, etc.) it managed to surprise me, too. The plot took some unforeseen turns, as did the character development; and I was gratified to see a few inside jokes worked into the script that would be very familiar to South Park fans.

This show really isn’t just one of Matt and Trey’s half-hour cartoons acted out in real life, though. It strikes me as the most thoughtful and, dare I say, considerate work of the duo’s long career. 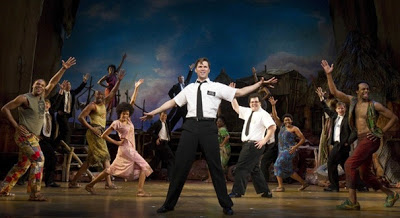 It delivers the hilarity and superior satire you want from Parker and Stone, and the spectacle you want from Broadway, without getting so “preachy and up its own ass with messages” that you leave the theater feeling guilty or resentful. I do think the ending was a little too pat, but that’s a minor issue given how well the show works as a whole–nothing falls flat, feels tacked on, or indulgent. I have no idea how much staying power the production will have in the long run, or how much appeal it holds for foreign tourists, soccer moms, or folks who have never heard of South Park.

But if you’re a Parker/Stone devotee, the spectacle of The Book of Mormon is a fantastic showcase of how far the duo have grown up since the tender days of Jesus vs. Frosty–clitoris and scrotum jokes notwithstanding.