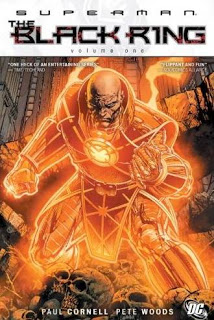 Superman: The Black Ring Vol 1
Written by Paul Cornell
Art by Pete Woods
DC Comics
$19.99 Hardcover
There is a belief that a hero is only as good as his villain.

With that understood, whoever opposes the Man of Stale (yeah, I said it) has to be a diabolical stand out in order to counteract Superman’s blandness.

Enter: Superman: The Black Ring, a testament to the arch-enemy to end all arch-enemies and (for my money) the most engaging aspect of Big Blue’s mythos: Lex Luthor.

Apparently, the events of Blackest Knight (here, figure it out) granted Luthor with immense power and a revelation that surprised nobody but Lex. The revelation that deep down inside he wants to be Superman.

Now stripped of the Orange Lantern ring (the source of his newfound power), Lex is left with a “Crisis” of his own…the personal kind.
Unique in his approach, Paul Cornell (Wisdom, Captain Britain and MI-13) uses Lex’s newfound self-awareness as a conduit to express interesting thoughts on power, obsession, and evil. 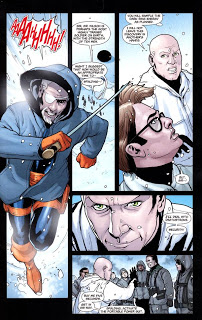 In Cornell’s depiction, Lex has become reinvigorated, shifting his agenda from Superman to recapturing the residual energy sprinkled across the universe by those Lantern-powered Cracker Jack prizes.
Wisely, the writer makes Luthor’s quest more about soul-searching than world-beating.

However, any profound self-actualization the character may stumble upon is met with amusing cheekiness.  (Hey…he’s still Lex Luthor and his megalomania must remain intact).

With an assortment of special guest appearances from every corner of the DCU (including one that’ll make Vertigo fans enraged or elated), artist Pete Woods (Infinity Inc.) rises to the occasion with The Black Ring.
Woods super solid pencils are charged with drawing everything from telepathic caterpillars to…a Lois Lane sex-bot?

His art is light enough to support Cornell’s audacity yet maintains the traditional line work that seems to mollify the majority of DC’s traditionalist readership.

With Superman: the Black Ring, Paul Cornell  proves how important Lex Luthor is to the good-vs.-evil dynamic by not only making a Superman comic without Superman (seriously, he doesn’t show up once) but by also making a book that is determined to fly in defiance of the fact.
I’m sure Lex wouldn’t have it any other way. 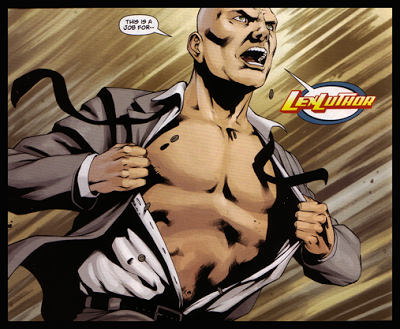