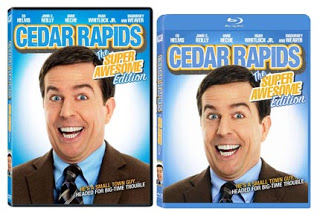 I really enjoyed Cedar Rapids when it was released earlier this year.

Check out the trailer below and then after the jump, find the full DVD/Blu-ray spec.  Cedar Rapids arrives on June 21st.

HITCH A RIDE WITH ONE HUMBLE SALESMAN AS HE EXPERIENCES THE ULTIMATE INSURANCE CONVENTION!
CEDAR RAPIDS
Slam Back a Shot of Cream Sherry and Dance with the Tiger when
CEDAR RAPIDS: SUPER AWESOME EDITION
Comes to Blu-ray & DVD June 21

Follow mild-mannered Tim Lippe as he takes off on an epic adventure to CEDAR RAPIDS, coming to Blu-ray and DVD in a SUPER AWESOME EDITION June 21st from Twentieth Century Fox Home Entertainment. This wildly funny and undeniably infectious comedy will have you wanting more of Lippe and his crew, Deanzie, Joan and Ronald as they cause mayhem at the most unconventional business convention of all-time.

In CEDAR RAPIDS, a naïve small-town Midwesterner (Helms) is sent to represent his company at a regional insurance convention in Cedar Rapids, Iowa, where his mind is blown by the “big city” and he finds himself in the midst of the most unexpected shenanigans.

All of the DVD features, plus

In this article:Comedy/Parody, DVD News