After the jump, check out reviews for Harry Potter and The Deathly Hallows Part I, Yogi Bear, Tangled, The Switch, Tron:Legacy, Hereafter and Black Swan.

Which one should you skip?  Find out after the jump. 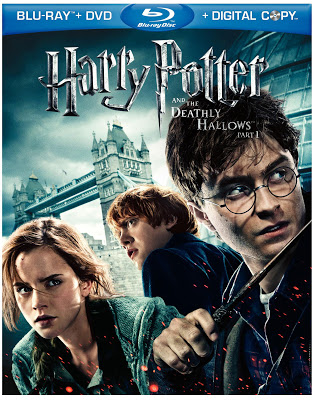 Unsympathetically dark and depressing, Harry Potter and the Deathly Hallows Part 1 presents the bleak and morose first half of J.K. Rowling’s final book, where Harry Potter and friends Hermione Granger and Ron Weasley find themselves away from Hogwarts and alone in the very dangerous and adult world of a magic apocalypse.

With the Ministry of Magic compromised, Harry and his friends look for the missing pieces of Voldemort’s soul, led by the posthumous guidance of their mentor, the deceased Albus Dumbledore.  The film looks as bleak as the story, with grey skies and sickly pallor.  Performances are across the board excellent, in no small part due to watching these characters (and actors) grow over the last decade.  A particular high point, Yates tells the story of the deathly hallows using a stylized animated segment that reminded me considerably of the work of Guillermo Del Toro.
My only criticism besides some alterations and additions to the text is that there are aspects of the story that lack, in my opinion, the necessary depth (the first two deaths of supporting characters and the confrontation with Draco Malfoy, in particular).  Nevertheless, the emotional coldness of this particular installment certainly left me craving the warmth of previous chapters and of course, a happy ending.  The Blu-ray combo pack includes both the standard DVD and Blu-ray disc as well as a digital copy.  Extras are plentiful, with a sneak peak of an opening scene of the upcoming final film, interactive features hosted by actor Jason Issacs, featurettes, and deleted scenes

Harry Potter and the Deathly Hallows Part I is a satisfying addition to the Harry Potter film canon, although I predict much of the structural issues will be alleviated upon the release of Part II.  Recommended. 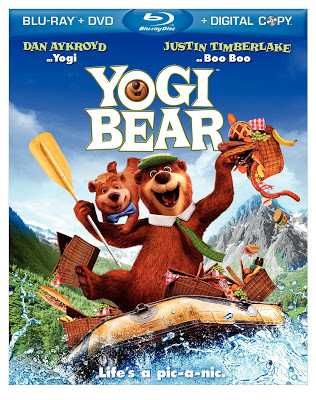 Yogi Bear isn’t smarter than the average bear, he’s just smarter than any other character in this charmless, humorless adaptation of the beloved animated series.

The plot (“We’ve got to save Jellystone Park!”) has been the go-to premise for most tv-to film adaptations.

Obviously geared for a younger audience, the film’s slapstick just covers up an overwhelmingly dull and uninspired execution of a potentially engaging adaptation.  Stunt casting of Dan Aykroyd and Justin Timberlake as Yogi and Boo Boo is an insulting, futile gesture to attract a wider demographic (Is there a Dan Aykroyd demographic?)

For viewers still in the single digit age bracket, Yogi Bear might be somewhat entertaining.  Beyond that, you deserve what you get. 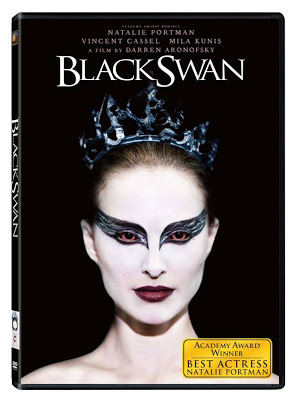 Natalie Portman plays Nina, a ballerina who’s descent into madness parallels her accomplishment of getting cast as the lead in her company’s production of Swan Lake, replacing former dance company star, Winona Ryder.

Over the top, visually stunning, and frighteningly suspenseful Black Swan features magnificent performances throughout.  Portman’s character is emotionally unstable, striving for perfection and socially stilted and her performance is remarkable.  Mila Kunis also shines in her role as another ballerina, as does Vincent Cassel as the ballet director and Barbara Hershey as Portman’s mother.

One of the most striking things of the film is that you aren’t entirely sure what is actually happening, as Nina’s delirium blurs the line between her reality and fantasy.  The film is intense, shockingly surreal and one of the most captivating cinematic experiences of the year.  Extras include a three part behind the scenes documentary.

Aronofsky has created an unforgettable, dark comic fairy tale that is both exhilarating and exhausting that winds up being the possible first remarkable film in the genre of balletsploitation. 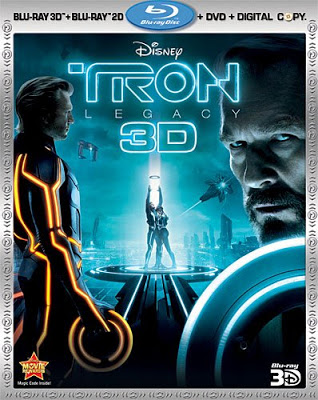 Tron: Legacy starts promising with a strong first act which sets up up the sequel to the 28 year old original film.  Digital technology helps to create an avatar of Jeff Bridges circa 1989, reprising his role as (Kevin) Flynn, hacker and visionary and now single father to his beloved son, Sam.

One night, after a bedtime story that recalls the adventures of the original film, Flynn says good night to his son and disappears leaving Sam and company, Encom without his guidance.  Sam grows up rebellious, annually pranking Encom and with little respect for anyone involved with the company with the exception of his father’s friend, Alan Bradley (who in the digital grid is the hero, Tron).

Alan informs Sam that he had received a cryptic message originating from Flynn’s abandoned video arcade.  Sam’s investigation leads to his entrance into the digital realm and that’s where the film begins to suffer.

Bridges appears as Clu 2, Flynn’s artificial intelligence program, who has taken over the system and keeps Kevin Flynn in seclusion.

Within the grid, the now evil Clu rules and spends his days looking for Flynn, who remains hidden; living with Wilde’s Quorra, a stunning wide-eyed program who serves as Flynn’s apprentice and confidant.

Unfortunately, digital special effects and eye candy don’t make the film any more interesting.  Once Sam is within the system, there’s a number of ideas, but no real plot or direction.

Kozinski’s strength lies with his visuals, as most of the performances feel misguided or not guided at all.  Most blatant is Bridges’ portrayal of the older Kevin Flynn as a zen hippie which feels like a rehash of his “The Dude” persona.  Michael Sheen’s brief appearance also feels like the work of an actor out of control, mugging for the camera like Johnny Depp in a Tim Burton film.

The film lifts considerably from the Star Wars series, including some of Lucas’ misfires (Quorra is essentially an individual Midi-chlorian).  It does, however play stronger on the small screen, where the character moments feel a bit more intimate than they did theatrically.

This set is phenomenal and packed to the gills.  Included in the set are four editions of TRON: Legacy (including the Blu-ray, 3D Blu-ray, DVD, and digital download) with a multitude of special features including The Next Day: Flynn Lives Revealed, a short post-Legacy film which sets up future mythology, several featurettes, a music video and a first look at the upcoming animated series, TRON: Uprising.

The final disc in the set is the Blu-ray debut of the original 1982 TRON film, which still visually impresses and entertains in spades.  Bridges, Bruce Boxleitner as Alan Bradley/TRON, Cindy Morgan as Lora Baines/Yori fight together against their corporate/virtual rival David Warner’s Ed Dillinger/Sark. TRON is a bit of a mess of a film, but somehow director Linsberger makes it work, reimagining the capabilities of cinema’s visuals without sacrificing strong characters and an imaginative story.

Extra features are plentiful, with the feature length documentary, The Making of TRON, a filmmakers commentary track, several featurettes, deleted scenes, and two new additions to the Blu-ray release, The TRON Phenomenon examining the film’s legacy and history and Photo Tronology, featuring Linsberger and son, Carl.

Despite my issues with the film the TRON: Legacy / TRON: The Original Classic 2-Movie Collection (5-Disc Combo) is a winner and a must have for any Cinegeek’s collection. 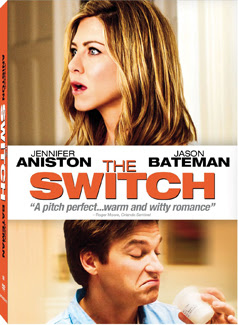 I’m not a big Jennifer Aniston fan, but her charisma and an extremely strong supporting cast make The Switch an entertaining and sweet diversion.  The Switch focuses on Aniston’s romantically challenged Kassie and her smitten best friend Wally (Jason Bateman) growing apart as Kassie decides to be artificially inseminated in order to become a mother.

Kassie finds a donor, handsome professor Roland (Patrick Wilson), who she thinks will make a great kid.  At Kassie’s insemination party, a drunken Wally accidentally spills the donor’s sperm, and is forced to replace it with his own.  It’s not long after that Kassie and Wally go their separate ways.

Several years pass, and Kassie and her son, Sebastian (the terrific Thomas Robinson) return to New York and she seeks out the now single Roland to possibly form a family and rekindle her friendship with Wally.  The thing is, Sebastian and Wally share a number of traits, so many in fact, that Wally realizes that he might have a son and that his feelings for Kassie have never truly been resolved.

Other performances that stand out are the hilarious Jeff Goldblum, who steals every scene that he’s in  as Leonard, Wally’s boss/friend and Juliette Lewis as Aniston’s glib friend, Debbie.

Directors Josh Gordon and Will Speck do an excellent job in making a farcical premise believable and memorable.  Recommended. 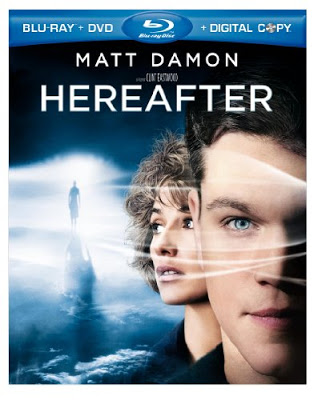 Clint Eastwood’s latest focuses on three very different people all dealing with death: George Lonegan (Matt Damon), a legitimate psychic who is now working a factory, trying to get as far away from his “gift” as possible; Marie Lelay (Cécile de France), a journalist who firsthand experiences the horror of a tsunami while vacationing in Thailand and twins Marcus and Jason (shared performances by Frankie and George McLaren) who share a horrible home life and are suddenly separated when Jason is accidentally killed, leaving Marcus alone and searching for answers.

The problem within is that it doesn’t work. The characters are all seeking unanswerable questions and as a result, the film seems a bit directionless. Damon gives another excellent performance and de France is also very good. The showstopper in the film is the opening sequence featuring the tsunami, but in light of recent world events, it’s far too frightening to admire despite it’s spectacular execution.

Both the DVD and Blu-ray are included and extra features include a digital copy, featurettes and a feature length documentary, The Eastwood Factor by film critic (and Eastwood biographer) Richard Schickel, which is unfortunately not much more than a self-congratulatory puff piece.

Eastwood is solid filmmaker and although Hereafter doesn’t rank among his best work, it’s worth a watch. 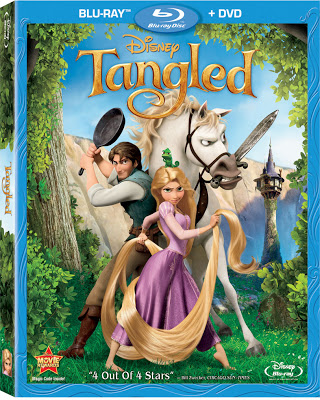 A retelling of the classic Rapunzel tale, Tangled is funny and entertaining and a far better film than the overhyped Toy Story 3.  For the last several years there’s been a number of rumors regarding the end of 2D animation at Walt Disney Studios and the push for only CGI films. Tangled is a happy amalgam, essentially using CGI to execute the classic 2D character designs that makes the entire picture feel very much like a classic Disney film.

And it is a classic Disney film, their 50th full-length animated feature film, in fact, and it features a number of their iconic trademarks including anthropomorphic animals, exciting action sequences, an independent and capable princess, a cocky and charming love interest, an evil hag who uses the princess for her own devices, thuggish bad guys and best of all, a happy ending.

Voice work is fantastic with Mandy Moore and Zachary Levi taking on the roles of Rapunzel and her suitor, thief Flynn Ryder. Other voices in the talented cast include Donna Murphy, Ron Perlman, M.C. Gainey, Jeffrey Tambor, and Brad Garrett.  Music by Alan Menkin is appropriately catchy.

Tangled is a wonderful film and a testament to the Disney legacy that should not be ignored or abandoned.  Highly recommended.