I’m a huge fan of the Warner Archive.  Month in and month out they release some amazing gems, some of them reaching video for the very first time.

After the jump, check reviews for five titles that without the Archive program likely would stay in the vaults forever. 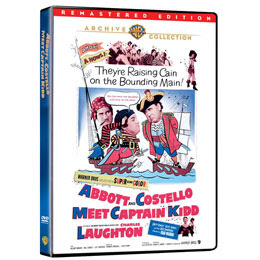 Abbott. Costello. Laughton. Three stars boasting one Oscar® between them deliver the yo-ho-ho-ho-ing of this merry musical-comedy tale of pirates and buried treasure. Casting an acclaimed actor renowned for gravitas in a knockabout romp may seem unusual. Yet Academy Award® winner* Charles Laughton, who portrayed menacing Captain Bligh in Mutiny on the Bounty and the title role in the swashbuckling adventure Captain Kidd, sails into this sea of silliness with great glee. Instigators of most of that silliness are, of course, the legendary Bud and Lou, turning the voyage under the Jolly Roger into a jollier one with their comic timing, verbal jousts and madcap mayhem. Arrrrrr you ready?

Review
As a fan of the comedy duo, the previously unreleased Abbott & Costello Meet Captain Kidd doesn’t disappoint.  Their only color film, Abbott & Costello star opposite Oscar winner Charles Laughton in a rare comedic performance.  Despite a brief running time of 70 minutes, the films boasts several musical numbers.  Far from the duo’s best film (it was made at the tail end of their career), it suffers from a lack of enthusiasm and a general feeling that they’re being forced to “do the same shtick again”.  Nevertheless, the film is a curiosity and worth a watch for fans of the comedy team or cinegeeks who want to see Laughton play a very different role.  No extras (which is fairly standard for the Warner Archive), but kudos for releasing this rarity. 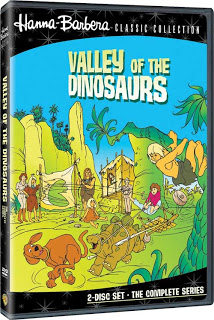 During a rafting excursion of an uncharted river canyon, Professor John Butler, wife Kim, kids Katie and Greg and family dog Digger get caught up in a mysterious whirlpool and resurface in a world of prehistoric creatures. Now everyday is an exercise in survival for the adventurous Butler family. They befriend a helpful cave-dwelling family and together must contend with an angry brontosaurus and a dangerous sabertooth tiger – and don’t forget the earthquakes and volcanoes! Any time the family can spare is spent building a boat or radio in hopes of finding their way back to the modern era in this 2-Disc, 16-Episode Collection of the exciting animated series Valley of the Dinosaurs.

Review
This obscure Hanna Barbera series shares a similar premise with cult series Land of The Lost, focusing on the Butler family who take a raft trip that goes awry, sending them through a time portal which propels them to a prehistoric world populated with cave people and dinosaurs.  The series is pretty entertaining, with action reminiscent of Jonny Quest, but poor comic relief (usually provided by the Butler’s dog, Digger interacting with small dinosaurs).  The series is pretty well executed, with solid dinosaur animation (perfect for any child with an interest in paleontology) and each episode offers brief science lessons to complement the story.  Another fantastic element is that despite the inclusion of comic relief, the producers wisely didn’t add a laugh track that was extremely prevalent in other animated series of the time.  No extras, but the set includes all 16 episodes with a running time of 344 minutes.  Highly recommended. 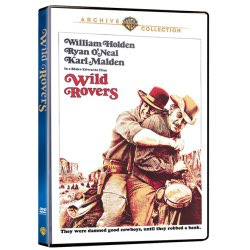 Lifelong ranch hand Ross Bodine decides cowpunching is no kind of life. So he and a raw cowboy half his age rob a bank to get the cash each needs to improve his lot. An indignant posse is soon in pursuit. Filmmaker Blake Edwards made his name with The Pink Panther and other comedies, but he also showed great skill in other genres with the thriller Experiment in Terror, the drama Days of Wine and Roses and this nuanced paean to the West. In performances perfectly matching Edwards’ balance of rowdy comedy and hardscrabble period realism, William Holden and Ryan O’Neal play the fugitive saddlebums, with Holden drawing special praise. “As he grows older, he grows better like a great old wine. All the reverberations from the previous roles are beginning to sound” (Roger Ebert, Chicago Sun-Times).

Review
Blake Edwards established himself as a comedic director with such films as The Pink Panther and Victor/Victoria, but Wild Rovers is a strange addition to his filmography.  Starring William Holden and Ryan O’Neal as two cowboys who upon questioning their mortality, decide to become bank robbers.  This edition restores it’s previously edited version with a 136 minute cut that is uneven, sluggish and somewhat dull.  Among the cast are Karl Malden, Tom Skerritt and Joe Don Baker.  Wild Rovers shifts tone on a moments notice and far too often, going from comedic banter to melodramatic gun killings in slow motion.  Extras are limited to a trailer (Road Show tracks and an intermission are included).  Holden delivers a fantastic performance, but at times it feels lost within this overlong and inconsistent addition to the genre.  For Western fans only. 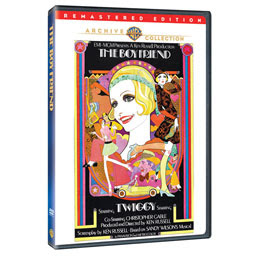 The star has injured an ankle, but the show – and inexperienced stage assistant Polly Browne – must go on. Break a leg, kid. And don’t let the presence of Hollywood director and talent scout Mr. De Thrill add any pressure. And so begins this colorful tale of theater hopefuls with stars in their eyes and greasepaint in their veins, a work that, under the guidance of director Ken Russell, is not just an affectionate filmization of Sandy Wilson’s London/Broadway stage hit but also an homage to the movie stagings of Busby Berkeley – complete with imaginative use of kaleidoscopic top shots and rows of leggy chorines. Fashion icon Twiggy makes her screen debut as sweet-natured Polly, a role played earlier by Julie Andrews in her Broadway debut. Curtain up. Maybe someone will be discovered tonight.

Review
Director Ken Russell’s work is more of an experience than a viewing and The Boy Friend is no exception.  Adapted from a stage show, this flamboyant musical stars fashion model Twiggy as the understudy to a stage actress who is being scouted for a big Hollywood musical.  The Boy Friend is a visually stunning experience and Russell fills the screen with Bubsy Berkely like musical numbers as the characters perform a low budget theater experience, as well as their own lush, over the top fantasy dream interpretations (which actually reminded me considerably of Zack Snyder’s Sucker Punch).  Like so many movie musicals, the book is rather standard and most of it’s success comes from the spectacle that The Boy Friend delivers in spades.  Extras include a short featurette.  The Boy Friend is slightly campy, visually stunning and thoroughly entertaining.  Recommended. 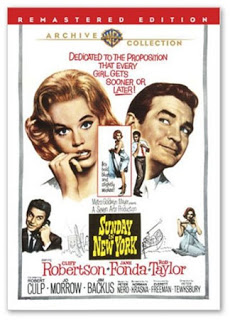 Before she became a great star and a two-time Academy Award® winner,* Jane Fonda was a screen ingénue who sent a string of bubbly romantic comedies soaring, including this charmer from the prolific pen of Norman Krasna (Bachelor Mother, The Devil and Miss Jones). Fonda portrays a virginal miss blessed with long limbs and a knockout profile who runs off from her fiancé (Robert Culp) to the swingin’ pad of her brother (Cliff Robertson) and then into the arms of a guy she meets on the 5th Avenue bus (Rod Taylor) — all the while trying to decide if she’ll say “yes” before she says “I do.” Filmed on location, Sunday in New York is a fun, sophisticated romp set to a hip Peter Nero score that features Mel Torme singing the title tune.

Review
Virtue and virginity aren’t the hot topic issue today as they were in 1963, when Sunday in New York was released.  Jane Fonda, having left fiance Robert Culp, arrives in New York to visit brother Cliff Robertson.  There she meets Rod Taylor, which sets off a milder series of sexual misunderstandings than your typical episode of Three’s Company.  There are no extras.  The film is an interesting reminder of how pop culture presented sexuality to the masses, but it’s really not much of anything other than predictable, a perfect discovery if you came across it on TCM but not a title that necessitates a viewing.