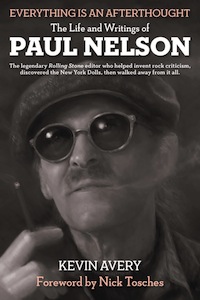 Instrumental in supporting the careers of Bob Dylan, The New York Dolls, Bruce Springsteen, Jackson Browne and Warren Zevon, Paul Nelson was a significant voice in music criticism until his death in 2006.

Now, Fantagraphics is combining a biography of the late writer with some of his best work in the upcoming book, Everything Is an Afterthought: The Life and Writings of Paul Nelson.

Music Critic Paul Nelson Finally Gets His Due
Fantagraphics is proud to announce Everything Is an Afterthought: The Life and Writings of Paul Nelson. Author Kevin Avery spent four years researching and writing this unique anthology-biography.  This book compiles Nelson’s best works and also provides a vivid account of his life.
In the ’60s, Paul Nelson pioneered rock & roll criticism with a first-person style of writing later coined “New Journalism.” During a five-year detour at Mercury Records, he signed the New York Dolls to their first recording contract, and then settled back down to music criticism at Rolling Stone. Through his writing, Nelson championed the early careers of artists like Bruce Springsteen, Jackson Browne, Rod Stewart, Neil Young, Warren Zevon, The Sex Pistols, and The Ramones.
But in 1982, he walked away from it all. By the time Nelson died in his New York City apartment in 2006, everything he’d written had been relegated to back issues of old music magazines.
“My original idea for this book was simply to anthologize Paul Nelson’s best work so that today’s readers could discover, as I had in my youth, his elegant and brilliant writings,” explains author Kevin Avery.  “But I soon realized that, in doing these pieces, Paul was ultimately telling his own story. And his story was so damn compelling it was impossible for me not to write about it.
American journalist, biographer, and poet Nick Tosches wrote the foreword to this landmark work of cultural revival, which stands as a tribute to and collection of one of the unsung critical champions of popular music.