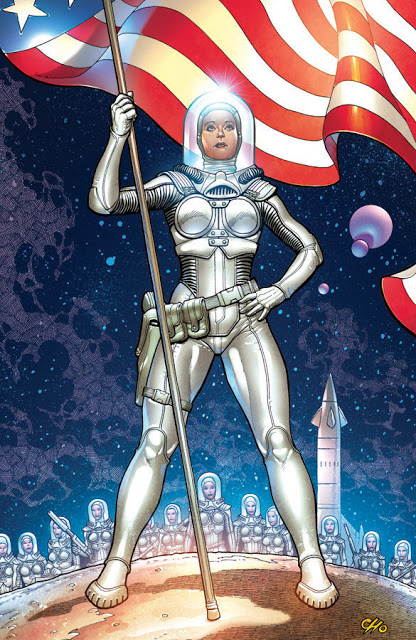 Image Comics has announced the June 1st release of 50 Girls 50 by Frank Cho, Doug Murray, and Axel Medellin.  The four issue mini-series is about the “voyage of the Space Vessel ESS Savannah and her beautiful crew as they fight to escape hostile aliens and exotic worlds, searching for the wormhole that will take them to their ultimate destination: Home.”

Press Release after the jump…

Working from a script written by Murray, based off a story conceived by Cho and Murray, Medellin has completed the entire four-issue miniseries, now in the process of being colored by SAVAGE DRAGON and INVINCIBLE colorist Nikos Koutsis. In addition to providing character and world designs, Cho is also illustrating covers for each issue.

“It’s been a long time coming, but we’re finally in the homestretch with this project,” said Cho. “We all know how disappointing it is when something planned as a 1-2-3-4 miniseries doesn’t ship monthly, so we wanted to make sure the entire miniseries was complete before offering it for sale. This baby’s 100% done, though, and you’ll be getting an issue a month from June to September, whether you like it or not.”

“We’re really pleased that Frank and Doug banked these issues so they could ship uninterrupted over this summer,” added Image Comics Publisher Eric Stephenson. “And everyone who’s seen Axel’s work on ELEPHANTMEN: MAN AND ELEPHANTMAN #1 knows what a great find he is, so it’s going to be like getting a double-dose of artwork over the course of this year.”

A sexy sci-fi romp set in a far-flung future, 50 GIRLS 50 chronicles the fantastic voyage of the Space Vessel ESS Savannah and her beautiful crew as they fight to escape hostile aliens and exotic worlds, searching for the wormhole that will take them to their ultimate destination: Home.