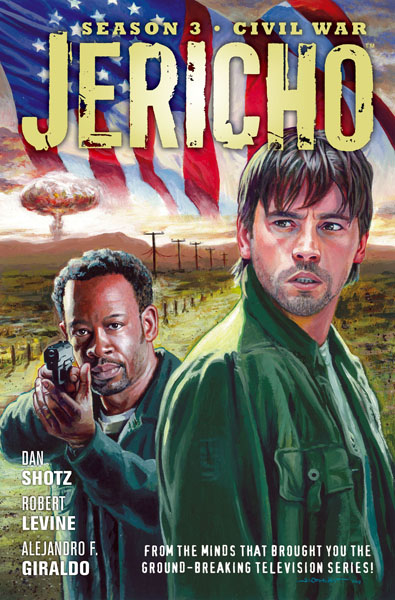 IDW teamed up with CBS to release a comic series based on the fan-favorite and summarily canceled 2006 televison show Jericho.  Now they are collecting issues 1-6 in a trade paperback.

The series was written by the same team that wrote the show and purports to pick up where the show ended after its second season.  It also had art by Alejandro F. Giraldo and Matt Merhoff

Press release after the jump…

IDW Publishing and CBS Consumer Products today announced the graphic novel continuation of the cult favorite television show that the fans would not let die—JERICHO! Picking up directly from the finale of CBS’s post-apocalyptic drama, IDW’s graphic novel will collect the complete JERICHO comic series from the original creative team behind the TV show. Debuting in 2006, CBS’s Jericho aired for two seasons, following residents of a fictional, post-apocalyptic town.

“Jericho is still thriving…and coming to a bookstore near you in June,” says Dan Shotz, Executive Producer of Jericho. “We are so excited about the release of the Season Three comic books in graphic novel form. IDW and CBS Consumer Products have been great partners in continuing the story that the Jericho fandom fight for everyday.”

Written by Shotz, with Robert Levine, Jason M. Burns, and Matthew Federman, JERICHO: SEASON THREE finds Jake Green and Robert Hawkins in the safe haven of Texas with the last remaining bomb from the first attack. From amidst the chaos they’re contacted by John Smith, the mastermind behind the first strike, seeking aid. As the Allied States army bears down on them, they must decide whether to side with their former enemy to fight a greater one…