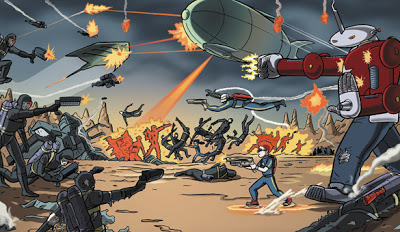 I stumbled upon Kid K-OS online and was immediately stuck by how awesome it looked.

Writer Kaja Blackley took some time out of his busy schedule as Chief Creative Director of Art House 7 to discuss both this graphic novel and his upcoming projects.

How would you describe KID K-OS? 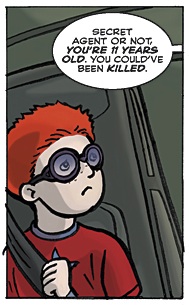 Imaginative, I have to say. Eclectic.

It’s the story of Buster Jones, a child prodigy enlisted by the government to work for a secret organization called HIVE – The Headquarters Investigating Visiting Evil. Buster becomes a key operative of the organization and patrols a fictional town in New Mexico with a one-armed bodyguard.

It doesn’t take long for readers to discover that although this town, Hoodoo, has the look of 1950’s suburbia it’s a place where intergalactic travel is as routine as pumping gas. It’s a technologically modern world viewed through a retro lens.

And I would say that at its core, Kid K-OS is a story about friendship, and how secrets and lies can threaten the deepest bonds.

It started with a simple drawing I did. I just opened up my sketchbook, pressed my pen tip to the paper and out came this freckle-faced kid wearing goggles, a T-shirt, cargo pants and Converse Hi Tops. A giant robot appeared just as quickly on the same piece of paper. I remember thinking, “Hey, these guys are kinda interesting.” So I continued to develop their story and became quite excited to see it come to life.

How did you start working with [artist] Alex Hawley and what unique stylist or storytelling skills do you think Alex brought to the project?

Alex and I have been good friends for many years. He works primarily in the animation field; he’s in great demand as a storyboard artist and background designer. We had talked for ages about teaming up on a project, but his schedule had been unforgiving. 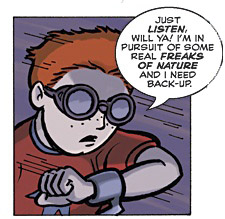 Call it fluke or call it fate, but just around the time I completed the story development for Kid K-OS my studio phone rings and Alex is on the other end. Work had been unusually slow; he wanted a change and hoped we could collaborate on something.

I told him about Kid, he dug it, and we immediately started production on Kid K-OS: The Agents of Doom.

We had a lot of fun working together. I would provide Alex with full-page layouts on 8.5 x 11 bond [paper], detailing the movement from panel to panel, and he would translate those layouts into the finished inked pages. Then my wife, Christina, who I feel is one of the best colourists in the business, brought his art to life. The finished result has the look of an amazing Saturday morning cartoon.

…What I enjoy most about Alex’s work is the retro look of his art, which is perfect for the type of story I’m telling. And his ability to give everything such scale makes Kid’s world appear 3-dimensional.

Is Kid K-OS a one-off, or a continuing series of graphic novels?

The characters continue from book to book, but each story is finite. A new Kid K-OS adventure will be released every year. Kid K-OS: The Agents of Doom is first, followed by Kid K-OS and the Robot Underground.

Was it important to create an all-ages book…?

Creators and publishers have to stop catering to the “over 18” crowd. The comic book industry needs attractive, intelligent all-ages material to keep the next generation of readers coming back to comic book stores.

That being said, I don’t tailor my stories for a specific market. It’s the characters and the world they live in that dictate the direction I take. Kid K-OS is appropriate for an 8 year old, but it’s just as appropriate and engaging for a 50 year old. The story has bite. The art and colouring are dynamic and, aesthetically speaking, the book is a pleasure to hold in your hands.

In 10 words or less, why should people read this book?

Can you describe your role within Art House 7?

I’m the Chief Creative Director. I develop all of the intellectual properties and oversee everything from book design to press proofs.

Comic strip artists of the ‘30’s, ‘40’s and ‘50’s like Roy Crane, Noel Sickles, Harold Gray, Frank King, Windsor McCay, Milton Caniff, Alex Raymond, Hal Foster, Will Eisner, Charles Shultz and Walt Kelly. They showed me at an early age the importance of getting to the point and moving on. For me, they are the trailblazers of North American comics. These artists did more with one page than many of today’s artist are doing with twenty-four.

Outside of the world of comics I would have to say my influences are quite eclectic. [Fine artists] Klimt, Schiele, Modigliani, Degas and [Bernard] Buffet continue to humble me. [Musicians] Keith Jarrett, The Beatles, Miles Davis, Chick Corea and Stevie Wonder perform for me regularly in my studio throughout the day and night. Books like Moby Dick or the I Ching blow my mind, and world cinema inspires me and informs my work.

What about artists who have worked directly in the comic book industry? Who do you like?

Kirby, Ditko…Romita. I really miss that era of comics – simple yet beautiful. I like Guy Davis, he’s a wonderful storyteller; Dave Sim and Gerhard, true innovators; Darwyn Cooke’s a lot of fun; Dan Clowes is always interesting; and I’ve always had a fondness for Wally Wood and Richard Corben.

European artists like Loustal, Prado and Pedrosa are a pleasure to follow. And Hergé and Tezuka are, for me, the cream of the crop.

What are you currently working on? 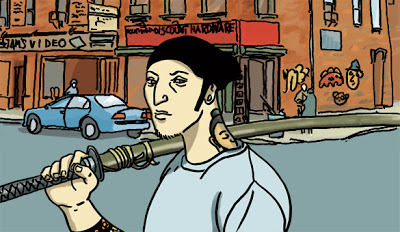 And finally, where do you see Art House 7 in five years?

I believe that we will have positioned ourselves as a respected boutique publisher of quality graphic novels. What many people don’t know is that Art House 7 has existed privately for four years. We have been quietly working away on material, getting ready for our debut. We’re starting off very slowly; fans and retailers see that we deliver on our promises. Even at our peak, we won’t release more than 4 or 5 new graphic novels a year. We believe in responsible growth and we respect the state of the commercial environment. 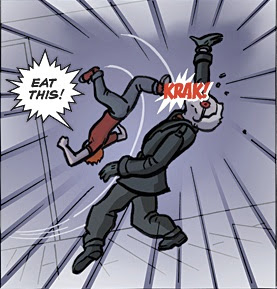 Kid K-OS: The Agents of Doom is available now.
For more information check out the ART HOUSE 7 site HERE!