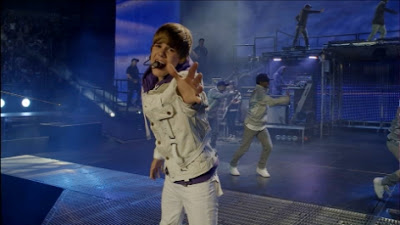 I just don’t get it.

But ladies of all ages seem to dig the Biebs.  Even Waverly Wizard Selena Gomez (who is dating him) said that he’s “like my brother.”  Then again, most siblings don’t inspire you to take off your purity ring.

I can’t help but wonder what kind of magic this Canadian teen idol is practicing.  Hopefully this no-holes-barred documentary will clue me in.

In retrospect, I probably should have rocked the hair flip back when I had enough that it doesn’t look like a comb-over.

PARAMOUNT HOME ENTERTAINMENT INVITES YOU TO EXPERIENCE THE INTIMATE AND INSPIRING STORY OF ONE BOY WHO TURNED
HIS BIG DREAMS INTO REALITY
JUSTIN BIEBER:
NEVER SAY NEVER
Bring Justin Home on FRIDAY, May 13
in a Blu-ray™/DVD Combo with Digital Copy or a Standard DVD
Including Exclusive New Footage 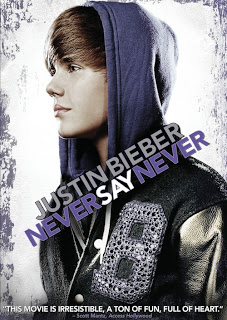 The captivating and inspirational story of a small town boy who became a pop phenomenon through sheer talent and determination takes the stage when the feature film JUSTIN BIEBER: Never Say Never debuts on Blu-ray/DVD Combo and DVD Friday, May 13, 2011, from Paramount Home Entertainment. JUSTIN BIEBER: Never Say Never follows Bieber’s journey from his early years to his rise from break-out internet sensation to global superstar, culminating in a sold-out show at the famed Madison Square Garden. Incorporating personal home footage that chronicles Bieber’s prodigious talent from early childhood, the film also features all-star musical performers. JUSTIN BIEBER: Never Say Never is the highest grossing concert-themed film ever in U.S. history, having earned more than $72.2 million at the domestic box office, surpassing the lifetime domestic grosses of
Michael Jackson’s This Is It.

The JUSTIN BIEBER: Never Say Never Blu-ray/DVD Combo with Digital Copy and standard DVD include a concert dance off that was not shown in theaters in which Bieber and his crew show off their amazing moves, a full-length concert performance of “Favorite Girl” from the Director’s Fan Cut of the film, footage of Justin’s team surprising lucky fans with free concert tickets and a final farewell to Bieber’s signature hairstyle.